Han and Spalti win BC Girls’ and Boys’ Championships 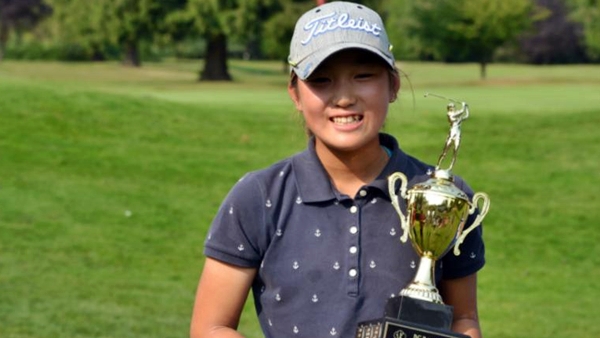 Han shot a two-under 68 on the second day of competition to overtake the lead from her position in third place after the first round, finishing with a two-day total of 138 (-2) as the only female competitor under par. The 12-year-old Meadow Gardens golfer bogeyed only a single hole during her final round on the way to claiming the title, and boasted a bogey-free back nine for the duration of the Championship, defeating several players her senior for the title, playing with composure beyond her age.

“It felt obviously great,” she said. “I just tried to play my best the whole round. I didn’t know how  they were playing until the last couple of holes. I feel really great about it.

“My putting was working well today, I missed a short putt on 16 but just continued on and forgot about it and I was a bit lucky today, I hit a tree and came back to the fairway, so I was lucky.”

Though it didn’t hurt having a few good bounces on her side, luck likely had very little to do with her round. Han finished eighth in last year’s Bantam Championship at only 11 years old, showing she is a great player even at a young age, and certainly one to watch.

Shirin Anjarwalla 14, led after the first round of the Championship, but dropped back to finish in second place shooting 73 (+3) on day two. The Nanaimo golfer started the day with a double bogey and unfortunately wasn’t able to make up the ground to reclaim the lead, but still finished strong at 1-over par (141) for the tournament.

Burnaby’s Sumie Francois finished third in her final year of eligibility for the Bantam Championship at +2 (142) after two days of tough-fought competition. Francois, 14, made an eagle on number 11 after four bogeys out but was unable to create the momentum she would need to take over the lead.

Last year’s Champion Alisha Lau and Tiffany Kong finished T4 to round out the top five.

Spalti, 14, led through two rounds of competition to claim the boy’s title shooting 69 both days, finishing 2-under par (138). His second round (-1) was highlighted by five birdies, helping him to hold on to the lead.

This was Spalti’s first year playing in the BC Bantam Championship and his final year of eligibility.

“It feels good,” he said. “Early in the front nine I though I lost the lead and all my group members started making birdies and were coming in strong to the back, but I managed to fight back. I bogeyed the last one, but luckily I still locked in the lead.

Spalti explained that his putting was one of the strongest points of his game and definitely was the biggest contributor to helping him secure the win.

Earlier this summer, the Shaughnessy Golf and Country Club member missed the cut at the Junior Boys’ Championship, but showing impressive self-command rebounded to win the Bantam title. Spalti withdrew from the Juvenile Championship next week but is planning to return to provincial championships next summer.

Khan Lee played a bogey-free second round making a strong push for the title finishing -2 on Friday. Lee, 14, finished second with 139 (-1).

Callum Davison finished with the day’s low score -3 to help move him into a tie for third with Daniel Sun, who shot -2 on Friday. The pair finished even for the championship.

The Novice division was added to the Bantam in 2014 for competitors with less experience in provincial competition. Natasha Kozlowski of Prince George finished in first with 91 points, followed by Sienna Kraus with 81 points and Claire Lovan of Surrey with 78 points in third.

On the boy’s side, Tyler Casper won the Novice Championship with 87 points, closely followed by Stephen Pon with 83 and in third, Jerry Li with 76 points.