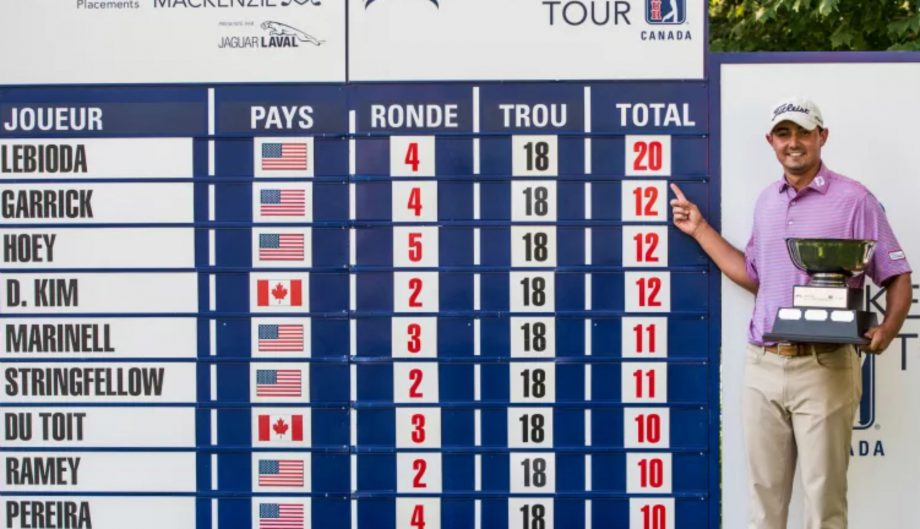 Winter Springs, Florida’s Hank Lebioda shot a final round 4-under 66 on Sunday at Les Quatre Domaines Golf Club to win his first professional title at the Mackenzie Investments Open presented by Jaguar Laval.

The 23-year old closed in style with a birdie at the 72nd hole to win by eight shots over Toronto, Ontario’s Daniel Kim, Rancho Cucamonga, California’s Rico Hoey and Atherton, California’s Jonathan Garrick, matching the PGA TOUR era record for largest margin of victory on the Mackenzie Tour.

“I’ve been putting in a whole lot of work this offseason and changed a lot of things about my game and myself, and I’m really proud to see the results show,” said Lebioda, a Florida State alum. “This is re-affirming that the work I put in is good work.”

Beginning the day with a two-stroke advantage over Kimberley, B.C.’s Jared du Toit, Lebioda polished off a 4-under 66 in Round 3, which had been suspended due to darkness on Saturday, giving himself a five-stroke advantage heading into the final round.

With a cushion to work with, Lebioda kept the field at bay with a solid 1-under front nine, then put the tournament’s result beyond question by holing his approach shot for eagle at the par-4 14th. With three more birdies down the stretch, he finished at 20-under for the week, capping things off with a fist-pump after draining a 20-foot birdie putt at the last.

“It hasn’t really sunk in yet. I’ll tell you, I did play well. I was very happy and very confident with my game, and I think these next few days I’ll let it sink in,” said Lebioda.

Lebioda had been playing well this season, notching two runner-up finishes and ranking sixth on the PGA TOUR Latinoamérica Order of Merit before heading to Canada for the summer slate of events. His standout play came thanks to work put in during the offseason on his putting and mental game with Dr. Brett McCabe.

“Acceptance. Accepting that even if I did have a bad shot, what really is the worst that’s going to happen? Am I going to lose a leg? Am I going to die? No. If I hit a bad shot, it’s just another opportunity to go prove how good I am,” said Lebioda, describing his changed approach for this year.

The win, which was his first made cut in three starts this season, moves Lebioda into sixth on the Mackenzie Tour Order of Merit.

Eight shots back in a tie for second were Kim, a former Mackenzie Tour member playing on a sponsor exemption this week, along with Hoey and Garrick, all of whom notched career-best Mackenzie Tour finishes.

Thanks to their position in the top-three on the Mackenzie Tour Order of Merit through six events, Wilmer, Alabama’s Robby Shelton, Camarillo, California’s Johnny Ruiz and Dallas, Texas’ Kramer Hickok all earned exemptions into the RBC Canadian Open on the PGA TOUR this week. Below are the top five players on the Order of Merit through six events:

With a total score of 12-under par in a tie for second, Toronto, Ontario’s Daniel Kim finished as the top Canadian on the leaderboard, earning Freedom 55 Financial Canadian Player of the Week honours and a $2,500 prize.