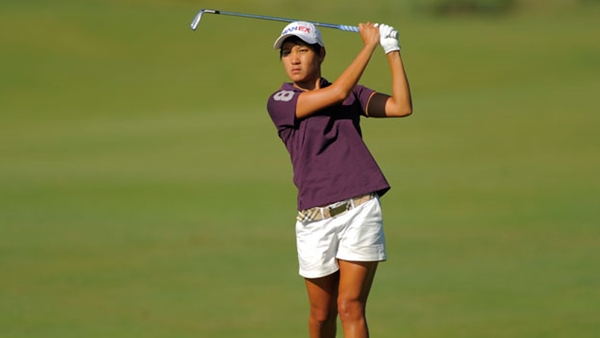 LONGWOOD, Florida – Florida’s Hannah Yun shot a course-record 6-under 65 in the second-round of the IOA Golf Classic to take a one shot lead heading into the final round on Monday.  Yun is 8-under for the tournament after her stellar round.

The final-round will be played Monday, March 31.  Play was suspended due to weather on Saturday forcing the completion of the 54-hole event to take place on Monday.

Yun played a flawless bogey-free round to jump from a tie for sixth to the leader with 18 holes to play.

“Today was just one of those days where I was feeling right, I could see everything and it’s a lot of fun to play golf that way because it comes easy for you,” said the former Florida Gators golfer.  “I was just trying to keep my rhythm, stay free and I was able to do that very well today.”

Yun has one career victory and seven career top-10 finishes on the Symetra Tour.  Her lone win came at the Volvik Championship in 2013.

“A win tomorrow would mean a lot, one step closer to the top-10 this year (on the Volvik Race for the Card money list),” said Yun.  “It would be huge if I could win another one this season; it would be a big boost to my confidence.”

Katelyn Sepmoree, a rookie on the Symetra Tour, shot a 5-under-par 66 on Saturday and stands in second place at 7-under for the tournament. The former University of Texas Longhorns golfer also played a bogey-free round.

Kendall Dye fired a 1-under 70 and is 5-under-par for the tournament.  She is in third place, three shots behind Yun.

Reilley Rankin, an LPGA Tour veteran, is in fourth place at 4-under.  Rankin shot a 3-under 68 on Sunday.

Sara Maude Juneau is the leading Canadian. The Fossambault-sur-le-lac, Que. native is 1 under after a 69 on Sunday and is tied for ninth.

The cut line was 7-over-par and 82 players will compete on Monday in the final round.

Sholer made a hole-in-one on the par-3 second hole on Saturday.  She finished the final seven holes of her second round on Sunday.

Sholer saved the ball and wrote the date and yardage on it.  She is not sure what exactly she is going to do with it.

“Being with Britney Hamilton was just perfect, we both screamed,” said Sholer.  “I was trying to hurry and get it in before the horn blew; it was cool how it happened.”

Hamilton and Sholer are good friends who met on the Symetra Tour and now both reside in Sarasota.  Sholer and Emma De Groot live together and Hamilton lives right up the road.