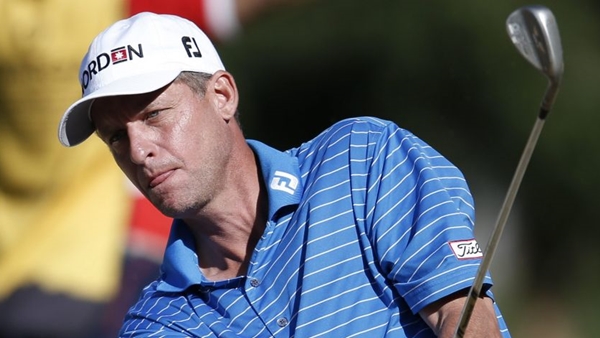 SINGAPORE – Anders Hansen of Denmark holed three straight birdies to close his round of 5-under 67 and move into a share of the lead with Thailand’s Panuphol Pittayarat after the third round of The Championship at Laguna National on Saturday.

Hansen, who won the last of his three European Tour titles at the Joburg Open in 2009, is playing in just his fourth event since returning from a six-month layoff due to a wrist injury. He was tied for fifth last week at the China Open.

“It was nice to finish with those three birdies,” he said. “It was a little more windy today so it was more tricky. It was a great finish.”

Panuphol, the leader after the first two rounds, made four birdies but dropped only his second shot of the week on the par-3 17th. He shot a 69.

The 21-year-old Thai will be the underdog in the final round on Sunday – he has never won on the European Tour and hasn’t even made the cut in three events on the Asian Tour this year.

“I’ve been in contention a couple of times where I got to play with some great players. I will try not to think about how they are doing and just do my best,” he said. “My performance so far this week has definitely given me a huge confidence boost.”

Hansen’s comeback has been quick after undergoing wrist surgery last year. He missed his first two cuts but has now shot below 70 in five of his last six rounds.

“Every time you are up there you have to be pleased so I’m looking forward to tomorrow,” he said. “I love competition and I love playing under the gun – it gets your attention.”

Both golfers were at 16-under 200 overall, two strokes ahead of Dutchman Robert-Jan Derksen and American David Lipsky.

Derksen last won on the European Tour nine years ago and is planning to retire at the end of the season. He had eight birdies – and three bogeys – in a round 67.

“It would be lovely to go out at the end of the season with one more win,” he said.

France’s Gregory Bourdy and England’s Chris Wood were in joint-fifth, three shots off the pace.