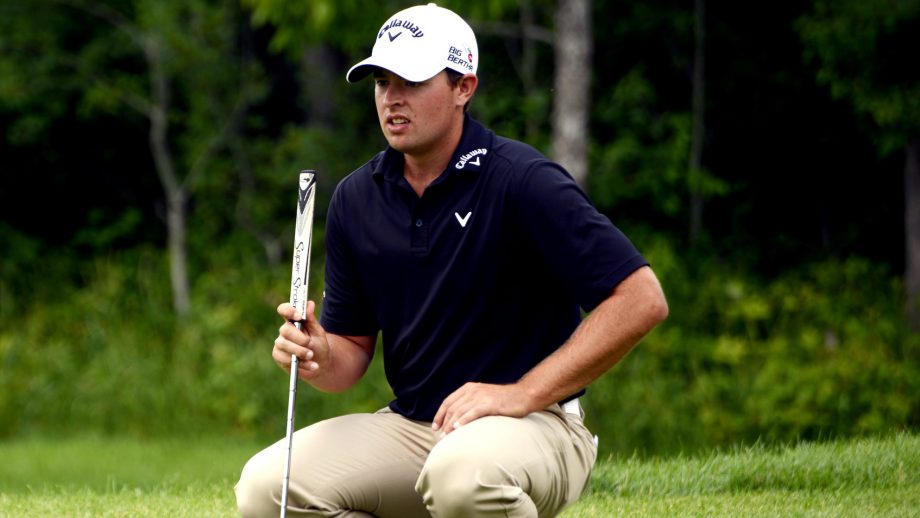 THUNDER BAY, Ont. – Scottsdale, Arizona’s Brandon Harkins shot an 8-under 64 at Whitewater Golf Club on Thursday, tying the course record to take the first round lead at the inaugural Staal Foundation Open presented by Tbaytel.

Harkins, currently in his fourth season on PGA Tour Canada, led by one shot over last week’s The Players Cup champion and Order of Merit No. 2 Tim Madigan of Rio Rancho, New Mexico and Stockton, California’s Joshua Stone.

“It was a pretty steady round. Not a lot went wrong,” said Harkins, who has three top-10 finishes in his PGA Tour Canada career. “It wasn’t flashy. I just hit a lot of greens and didn’t really miss anything inside of 10 feet. I just kind of plodded my way around and didn’t get ahead of myself, which is always good. It’s kind of cliché, but that’s what I did.”

The 28-year old made five birdies in a seven hole stretch on his opening nine and said that a solid start on the demanding 10th, 11th and 12th holes at Whitewater, where he started par-par-birdie, set him up for a solid round Thursday morning.

“I just kind of got a little momentum going there and made a few putts, and it just always seems like once you get a few to go, a few more happen, and that’s how it went,” said Harkins, whose best finish on PGA Tour Canada is a solo second performance last year at The Great Waterway Classic, where he shot a final round 62.

Madigan, a shot behind Harkins, has been on a tear of late on PGA Tour Canada with top three finishes in three of his last four starts, including his breakthrough win last week in Winnipeg. He kept the momentum going Thursday with a 65, the 20th time he has broken par in 26 rounds so far on PGA Tour Canada.

“The course was there for the taking, but you really had to strike it well today and I was fortunate enough to do that,” said Madigan, adding that he tried not to approach this week any differently following his win last week. “It’s just another day at the office. I just tried to go out and shoot the lowest score that I could and luckily it was 65, so I’m just having fun.”

The 24-year old Stone carded eight birdies and just one bogey to post the best round of his rookie season on PGA Tour Canada.

“I stayed really patient and made a lot of putts,” said Stone. “I got off to a great start on my front nine, again just telling myself to stay patient. I played real solid and just got a few putts to fall.”

Sean Shahi of Laguna Niguel, California and Jeffrey Corr of Apopka, Florida were one shot behind Madigan and Stone with a pair of 6-under 66s, while open qualifier Ryan Terdik of Brantford, Ont. was low Canadian at 5-under, tied with five others.

It would be permissible for Joel Dahmen and Tim Madigan to get a bit ahead of themselves as they prepare to make their first PGA Tour starts at the RBC Canadian Open next week. The pair have both secured spots in the top three on the Order of Merit through this week and will be exempted into the national open, but both insisted their focus is on this week in Thunder Bay.

“It does no good for me to be thinking about the RBC Canadian Open, so all of my effort is just focused on playing a good tournament here,” said Madigan, the current Order of Merit No. 2. “I’m not even worried about next week because this is the tournament I’m playing in right now.”

Dahmen admitted that his thoughts have wandered towards Montreal, but that he has a renewed focus on maintaining his spot atop the Order of Merit thanks to Madigan’s strong play of late. After his win at the Syncrude Boreal Open presented by AECON, Dahmen was $28,815 ahead of second place, but now leads by just $5,418.

“You try not to treat it as a warm up, but in your mind you’re thinking about it being your first PGA Tour event. With Tim only a few grand behind me though, every shot counts out here, so I’m doing my best to put in a good week here,” said Dahmen.