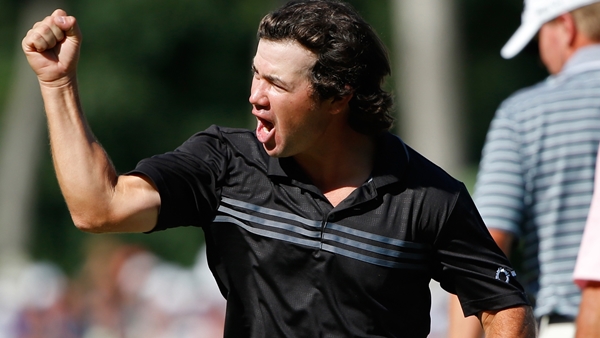 SILVIS, Ill. – Brian Harman used three straight birdies down the stretch to hold off Zach Johnson by one stroke and win the John Deere Classic on Sunday for his first PGA Tour title.

Harman withstood Johnson’s challenge by making three birdies beginning at No. 14 to get to 23 under with two holes to play. Johnson, playing four pairs ahead of Harman, birdied the 17th to get within a stroke, but ran out of holes.

Three-time winner Steve Stricker fell off the pace set by Harman on the front nine, then fell off the leader board with a double-bogey on the par-3 12th. His approach ended up in high brush behind and below the green, and he couldn’t recover, finishing with a 72 and a tie for 11th at 269.

Brown was tied with Johnson and Clark briefly midway through the round, but played the back nine in par 36 and fell back.

Clark, the lone contender with a long putter, bogeyed No. 9 to fall out of the joint lead.

Harman, whose best previous finishes were ties for third place, also earned his first invitations to the Masters and the Tournament of Champions.

He got his third eagle in 19 holes when he eagled the par-5 second for the second straight day. He sank a 4-foot putt after a brilliant approach from 223 yards. A bogey on No. 5 was offset by a birdie on the ninth, the most difficult hole on the front nine. Harman stood 19-under at the turn, and added a birdie at No. 10 to go to 20 under.

Johnson started three strokes behind Harman, but caught him by the 14th hole, when he tapped in from 10 inches for his third birdie in five holes and sixth of the day.

Harman came to the drivable par-4 14th minutes later, and after watching Stricker scramble for a par, got up and down from a greenside bunker with a 14-foot birdie putt. He added birdies on the next two holes to pull away from the field.

Defending champion Jordan Spieth finished in a tie for seventh after a closing 66 for 268. He was joined by Bo Van Pelt, Ryan Moore and Johnson Wagner.