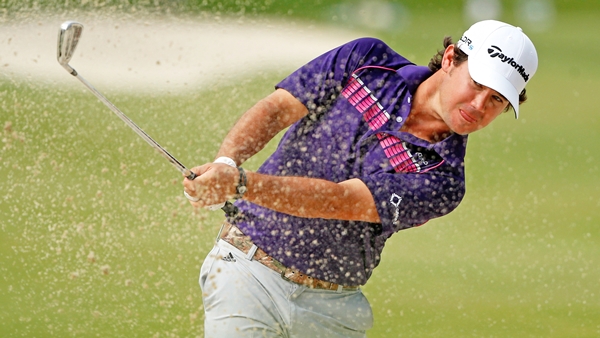 SILVIS, Ill. (AP) — Brian Harman had two eagles in a 6-under 65 on Saturday that gave him a one-stroke lead after three rounds of the John Deere Classic.

Harman’s solid performance got him to 17-under 196 for the tournament at TPC Deere Run. Three-time winner Steve Stricker is alone in second, one stroke better than Scott Brown heading into the final round.

Tim Clark, Jerry Kelly, William McGirt and 2012 champion Zach Johnson are three back at 14-under 199. Clark shot a 64 to move into contention.

The 27-year-old Harman has never finished better than third on the PGA Tour, but he played quite well in the third round. The lefty hit 17 greens and 12 of 14 fairways.

Stricker finished strong for a 7-under 64. He had his streak of bogey-free holes end at 24 with a 5 at the par-4 11th, but rallied for birdies on the last two holes.

Brown matched the lowest PGA Tour round of 2014 with his 10-under 61. On a day when players were allowed to clean their ball in the fairway because of an early morning downpour, he flirted with a 59, but had to settle for birdie on the par-5 17th after reaching the green in two shots, and then parred the par-4 18th.

Jhonattan Vegas played with Brown and nearly matched his score with a bogey-free 63 for 200, tying Ryan Moore for ninth place. He opened with three birdies in succession, and collected an eagle on the 17th.

Clark has missed the cut in five of his last seven tournaments, but birdied seven holes to post his best round of the year and get within three shots of Harman.

Harman’s long eagle putt on the second hole triggered his nice round.

He had birdies on the fourth and eighth holes to go out in 31, and then added two more birdies before his long downhill eagle putt on the 17th, which turned left in the last 15 feet before falling into the cup. His bogey at the final hole, coupled with Stricker’s birdie there, trimmed his three-stroke lead to one shot.

“I was just trying to get back into the golf tournament, and it turned into a great round,” Brown said.

Vegas, who had shoulder surgery last year, needs to make over $280,000 this week and in his next two tournaments to keep his PGA Tour card. A good finish here could take care of that.

“Whatever happens happens, to be honest,” Vegas said. “If it works, fine. If it doesn’t, we go to the range.”

Defending champion Jordan Spieth shot 67 and is tied for 14th at 202, six strokes behind Harman. Spieth came from six off the pace last year to win.

Canada’s Brad Fritsch climbed 24 spots up the leaderboard on moving day to get within striking distance of the lead. The Ottawa native is at 12-under 201, five back of the lead, after a third round 63.

David Hearn slipped five spots down the leaderboard into a tie for 62nd after his third round 69. The Brantford, Ont. native is sitting at 4-under 209.