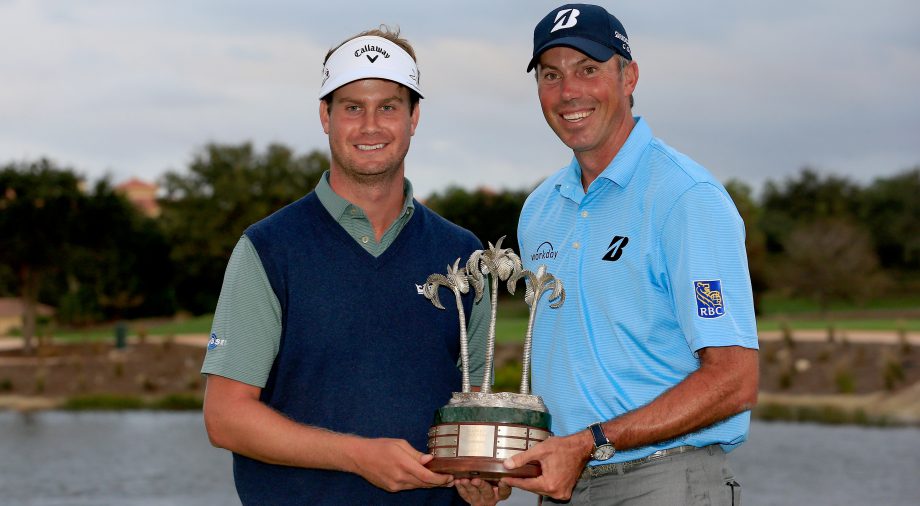 English and Kuchar also won in 2013 in their first start together and finished second the last two years.

“It’s a thrilling event to come out with a win, amazing feeling,” Kuchar said. “I think it’s just such a fun partnership we’ve had. We’ve had such a good run. To have our last four events together, to have our track record be first, second, second, first is quite amazing.”

English eagled the par-5 17th and they closed with a 7-under 65 in better-ball play to finish at 28 under.

“We had some good action there and it kind of came down to the last couple holes and kind of set up perfect on 17 for me,” English said. “Really reachable par 5 and hit a really good drive off the tee and knew Kuch was in really good position so I could play really aggressive. Hit a really good 8-iron right where I wanted to and made about a 12-footer.”

“That’s the difference in these events,” Kuchar said. “Pulling out some shots like that, getting an eagle, getting that two-shot swing, that’s a big deal. This event comes down to you need to make birdies, you need to make some scores under par, and to do it on the 17th hole today and the position and the situation we were in, it was a battle. We weren’t making a huge number of birdies. It’s not like we were just battling with birdies, it was a fairly challenging day. But for Harris to come through and eagle 17 and give us that one-shot lead.”

“We just couldn’t get that momentum,” Stricker said. “A shot here or there. Jerry played great. Wish I could have helped him out a couple more times. I had some putts at it I didn’t make, but it was fun. Harris made an eagle. I knew somebody was going to do something there. It was just playing too short. He hit two great shots there at 17 and that was the difference really.”

English and Kuchar each earned $385,000. They opened with a 57 on Thursday in the scramble round and had a 66 on Friday in modified alternate shot.

Charley Hoffman and Billy Horschel were third at 26 under after a 61.

Mike Weir of Brights Grove, Ont., and Gary Woodland tied for last with Lexi Thompson and Bryson DeChambeau at 16 under. Thompson became the second woman to compete in the event, following Annika Sorenstam with Fred Couples in 2006.