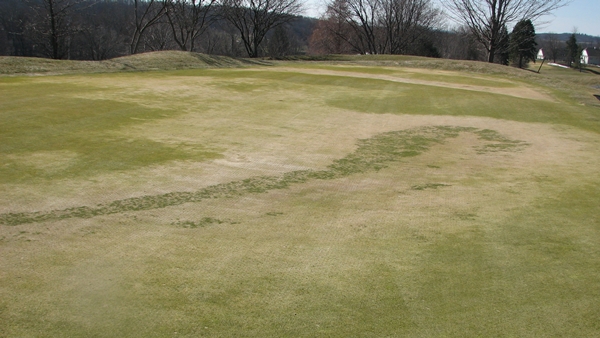 In Southern Ontario the grass is now green and although temperatures are struggling to stay consistently warmer, one would think the ridiculously harsh winter just past should now be a distant memory.  Instead many golf clubs are facing damage to greens and fairways caused by ice, frigid temperatures and devastating wind chill. This has caused conditions known as winter injury, winter kill and desiccation.

The conditions have forced many clubs to open later than usual and some have or will open with temporary greens. A few facilities across Southern Ontario will not open for another four to six weeks, as they must replace the surfaces of all of their greens with new sod or seed. Club superintendents have been working endless hours to develop a plan to repair the damage and then begin its execution.  They have sought out expert advice and shared it among themselves.

Cooperation from Mother Nature is very much needed to expedite some grass growth and help these clubs get back in business.  We also recognize that along with this challenge some clubs have and are facing some serious flooding conditions as the snow pack melted and the ice jams formed in rivers.

I was recently chatting with some clubs about their course conditions and it was interesting to hear them say how grateful they are to have only five or six temporary greens knowing that other clubs faced a far greater challenge refurbishing all of their greens.

In addition to weather cooperating golfers need to be patient as their clubs work their way through this difficult start to the season and the unexpected expense it has caused.

I hope clubs will work together to get through this and that the more fortunate will reach out to clubs that are not fully open and let them know if they have some tee times available they could be filled by players waiting for their clubs to recover.  As the neighbourly thing to do, this can be a win-win for our clubs and golfers if we all join forces and work together.

Christine Dengel is a PGA of Canada golf professional with more than 30 years of experience in multiple facets of the golf industry, and a lifelong passion for and commitment to the game of golf.