Head coaches weigh in on remarkable year for Team Canada 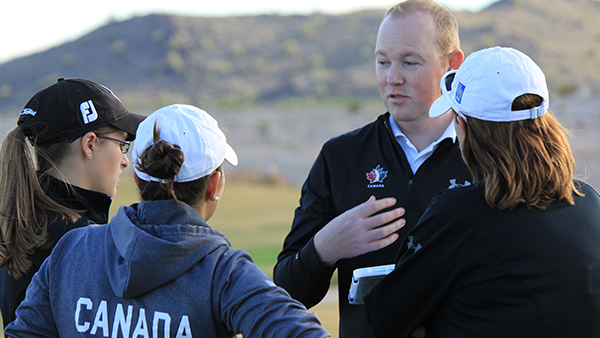 The 2013/14 season was arguably the best year in Canadian amateur golf history. Canada obtained the world’s No. 1 ranked female amateur spot (Brooke Henderson), a 2nd place finish in both the men’s and women’s World Amateur Team Championship and both a male (Corey Conners) and female (Henderson) finalist in the prestigious U.S. Amateur.

Adam Svensson (Surrey, B.C.) won the Jack Nicklaus award—given to the most outstanding NCAA Div I,II and III athlete—for his record-setting seven victories playing for Barry University. Taylor Pendrith (Richmond Hill, Ont.) drove his way up the leaderboard at the RBC Canadian Open, finishing as low amateur at 3-under par. Jennifer Ha, a 20-year-old member of the Women’s Amateur Squad, was one of only four Canadians to make the cut at the 2014 CP Women’s Open.

Collectively, both Amateur Squads saw each of its five players crack the top 100 in the World Amateur Golf Rankings (WAGR). That had not happened before to either squad in the program’s 11 year history—in 2014, it happened to both.

Aside from the players themselves, there were many factors at play that lend to the success of Team Canada—perhaps none more than the dedication of Team Canada’s coaching staff, led by Head Coaches Tristan Mullally and Derek Ingram.

“We really have had the best year in program history and I couldn’t be more proud of the girls,” said Women’s Head Coach, Tristan Mullally. “If it gets any better than this—maybe we’ve won the lottery,” he said with a laugh.

Mullally, a PGA of Canada class “A” member, has been leading the women’s program for the last three years alongside Canadian coaching veteran and men’s Head Coach, Derek Ingram.

“We had a fantastic year with great results across the board from virtually every player,” said Ingram, a Winnipeg native and also class “A” member. “It’s great to see these guys develop into great young players and great young people but at the same time it’s exciting to take an unranked player and help them get to the top,” he said.

When asked what the goals are for the upcoming season, both coaches shared the feeling that last year’s results are going to be difficult to match.

“We’ve been able to improve results year-after-year with the program but last year we set the bar very very high,” said Mullally. “There are new players coming in and it will definitely be difficult to match—but it won’t be from a lack of trying that’s for sure.”

“With the change in players it’s certainly going to be tough to match last year’s results,” Ingram added. “Having said that, we are always trying to get better and I’m really looking forward to the new season and new challenges.”

Both Ingram and Mullally took on additional players as part of the Young Pro Squad launch in 2013. Heading into the program’s second year, the coaching staff remains focused on fully incorporating the program as the final tier of the Team Canada umbrella. The 2014/15 team is yet to be named—the announcement will likely take place sometime early in the new year.

At the bottom of that umbrella is Team Canada’s Development Squad. The National Amateur squad players often come up through this squad under the direction of coaches Robert Ratcliffe and Ann Carroll, who work in unison with Ingram and Mullally. In a perfect world, Team Canada will help a player come up through the Development Squad, transition to the Amateur Squad and make the Young Pro Squad for one final step of guidance before independence on professional tours.

After quite a busy season on the golf course, Brooke Henderson is finally getting a chance to enjoy her new stardom as the world’s No. 1 amateur female golfer.

The Team Canada member and Smiths Falls, Ont. native has been spotted at numerous sporting events taking on ceremonial roles.

In late September, Henderson dropped the puck for a ceremonial face-off at the OHL pre-season game between the Ottawa 67’s and the Kingston Frontenacs.

In mid-October, the Ottawa Senators tweeted a picture of her and her sister Brittany.

The Henderson sisters also had a chip off during half time of the Ottawa Redblacks’ game against the Montreal Allouettes on October 24th, taking a 70 yard chip shot with a neon pink ball.