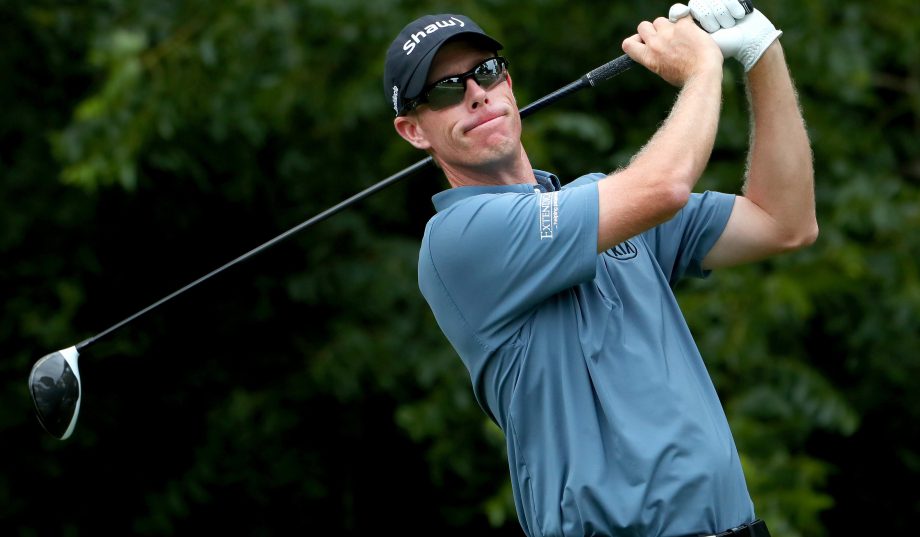 FORT WORTH, Texas – Bryce Molder was joking around with playing partner Scott Langley as the sky darkened over Colonial.

“It was almost like they were about to blow the horn for darkness,” Molder said.

Except it was early in the morning after Molder – the leader after a 6-under 64- and Langley began play in the first group off the 10th tee Thursday in the Dean & Deluca Invitational at Colonial.

“It wasn’t dark to where you can’t see the ball flight, but you’re kind of reading putts looking a little funny at it,” Molder said. “It was dark. It was weird. It was almost like late, late, late in the day.”

They were on the 16th green next to the clubhouse when play was stopped because of rain and lightning in the area. After the 75-minute delay, when clouds thinned considerably, Molder had six birdies in his last nine holes and the 64 held up for a one-stroke lead over Patrick Reed, Anirban Lahiri and Webb Simpson.

Ryan Palmer, the Colonial member whose caddie James Edmondson is the four-time club champion, joined Jason Dufner, Martin Piller and Kyle Reifers in a tie for fifth at 66.

“It’s a golf course I can step on to each tee and don’t even need my yardage book,” Palmer said. “To shoot 4-under out here on a Thursday, you’re not hurting.”

Jordan Spieth, the world’s No. 2-ranked player, was among nine players at 67 after his breezy afternoon round when he missed the first six fairways. But he hit eight of the first nine greens and 14 overall while carding only one bogey – at the 244-yard, par-3 fourth hole.

“It was so tough to gauge the wind correctly and get the ball close to the hole,” Spieth said. “On a day like this, you’re just really looking to hit greens in regulation, be as stress-free as possible, and it felt like we were out there.”

Seventh-ranked Adam Scott, who in 2014 won at Colonial to cap his first week at No. 1, had an opening 72 with four birdies, four bogeys and a double bogey.

Jason Kokrak was at 6 under and tied with Molder for the lead when he hit a drive in the centre of the 18th fairway. But his approach went into the water to the right of the green, as did the next shot after his drop. His quintuple bogey 9 ended a round of 69.

Kevin Chappell (68) had the shot of the day with an eagle on the 387-yard 10th hole when his 8-iron approach from 158 yards went into the hole on the fly.

Moulder, with one win in 251 career PGA Tour starts, had his first 18-hole lead since the 2002 Byron Nelson. He finished Thursday with four consecutive birdies – all from at more than 10 feet, including a 20-footer at No. 7 after his drive into a fairway bunker on the 438-yard hole.

His only non-birdies on the front nine were at Nos. 3-5, known as the Horrible Horseshoe because of the layout and difficulty of that trio. He had pars of each of those holes, the 452-yard dogleg left 3rd hole, the long par 3, and the 465-yard 5th hole parallel to the Trinity River.

“I hit a lot of greens early, 20, 30 feet, and just kind of rolled it up close,” Molder said. “And then all of a sudden hit a couple close when I made the turn, Nos. 1 and 2, got some close birdies. … Maybe (the delay) just kind of helped me wake up. Actually, I went back out on the range and just kind of one little tinker here or there and found a little groove for the rest of the 12 holes.”