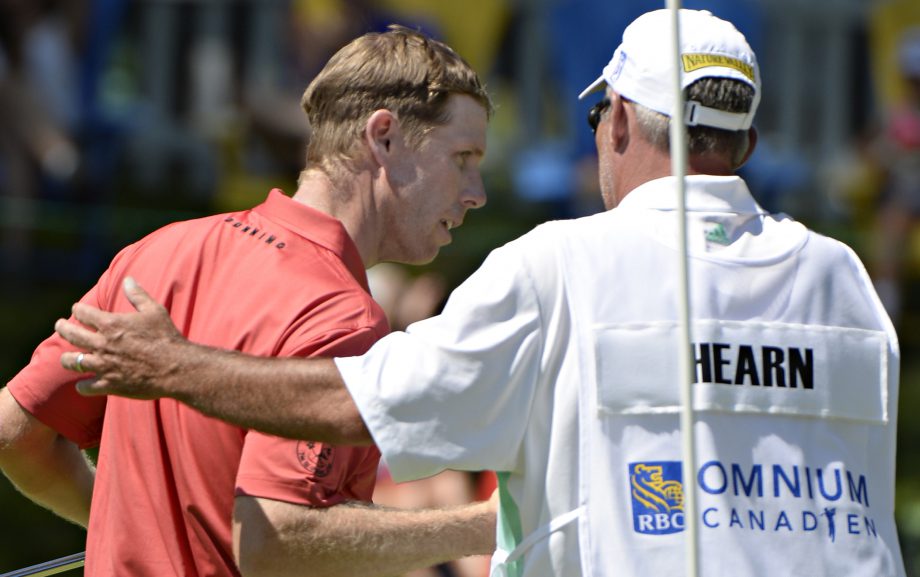 Canadian David Hearn knows that he can break through on the PGA Tour as long as he keeps trying.

Hearn is having the best season of his pro career and has become a popular dark-horse selection to win the PGA Championship, the final major of the season.

A third-place finish at the RBC Canadian Open three weeks ago helped Hearn pass the US$1.7 million mark in earnings this season. More importantly, it’s given him momentum headed in to the PGA Championship.

“My confidence is definitely very high right now,” said Hearn on Thursday. “To be in contention and to play the golf I did at the Canadian Open felt amazing. I just need to keep giving myself these chances, because I’m definitely playing with confidence.”

The 36-year-old Hearn’s best finish at the PGA Championship came in 2013 (T47). Despite the way Whistling Straits is designed – it’s more links-style than a traditional PGA Championship layout – Hearn says he knows what it will take to contend.

“The reasons that major champions are the best in the game is because they’re able to keep golf at it’s most simple,” said the native of Brantford, Ont. “It really boils down to making good shots and good putts when you need to, regardless of what the golf course looks like.”

Whistling Straits was also the site of the 2004 and 2010 PGA Championships where Fiji’s Vijay Singh and Germany’s Martin Kaymer were the respective champions. Both would go on to become No. 1 in the world.

“We don’t see courses like this (Whistling Straits) very often, which makes them so unique. I think that’s why major championships like to go to these courses, because it tests a different area of our game,” said Hearn.

Hearn says he will try to play Whistling Straits in a way that makes him comfortable.

“As extreme as the golf course looks, if I can make it play like a North American-style golf course _ and focus on hitting fairways and greens and giving myself birdie opportunities – I like my chances here,” said Hearn.

Graham DeLaet of Weyburn, Sask., and Nick Taylor of Abbotsford, B.C., were scheduled to be the other Canadians at the PGA Championship, but DeLaet pulled out on Monday as he continues to struggle with an injured left thumb – the same injury that forced the 33-year-old to pull out of the RBC Canadian Open three weeks ago.

Although disappointed to withdraw from the RBC Canadian Open – and announce that he was also withdrawing from the PGA Championship – DeLaet said Friday he was inspired by seeing his friend Hearn have a chance to win Canada’s national open.

“He played well and it was so much fun to watch,” DeLaet said of Hearn’s final round at Glen Abbey.

Hearn and DeLaet are also fighting for a spot on the International Team at the biennial Presidents Cup competition.

The top 10 point-getters on both the International and American sides automatically make the team and there are two captain’s picks made to fill out the rest of the squad.

“Every event I have leading up to the Presidents Cup cutoff is a big event for me,” said Hearn. “I’m really looking forward to continuing my good play, and giving captain (Nick) Price a little notice of how I’m playing. But, I’m going to have to earn my way onto that team like Graham did two years ago.”

Although not in the Presidents Cup conversation, Taylor is in the PGA Championship thanks to his maiden Tour victory in November – something both Hearn and DeLaet are still shooting for.

The 27-year-old will be playing in his first major as a professional – he finished as low amateur at the 2009 U.S. Open – and admits he’s looking forward to the opportunity.

“I’m very excited,” Taylor said. “I don’t have any specific expectations for the week, but I’m going to focus on my preparation and make sure I’m in the best position I can be once the first round begins Thursday.”