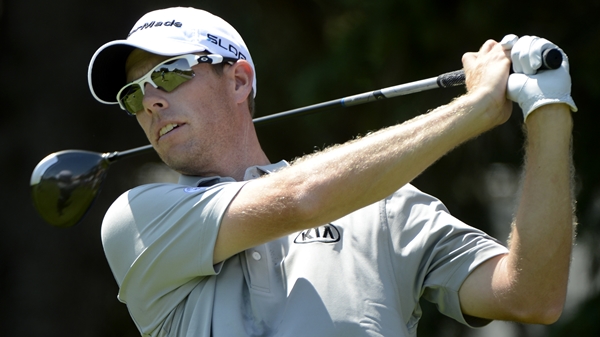 At an intimate event put on by Hearn’s clothing sponsor, Dunning Golf, at Thornhill Golf & Country Club, Hearn admitted to a small group that since they’ve announced golf is returning to the Olympics in 2016, it’s been his number one goal.

The 35-year-old Canadian even marks his ball with Olympic-edition toonies on occasion.

Although Hearn earned over $1 million on the PGA Tour this year – the third year in a row that he’s reached that plateau – he knows there is much still to accomplish.

But Hearn, ever the psychology major, is trying not to get too far ahead of himself as he gets ready for the 2015 season.

“Billy Horschel just showed the world what it means to get on a hot streak and get a little confidence,” Hearn explains. “You never know when that game is going to happen, but you want it to come out in you. I feel like I’m very close to playing that kind of golf more often.”

Hearn admits that he played a lot of good golf in 2014, but not a lot of great golf.

“My game was on the edge all year,” he says.

Hearn struggled out of the gate on the West Coast, making just one out of four cuts. But, he played well on the Florida Swing, including a tie for sixth at the Players Championship, which kick-started his summer. A highlight for Hearn was making it to the Open Championship. He was first alternate and jumped on a plane for his maiden voyage to Europe, in hopes of making the field.

He did so when former RBC Canadian Open champion Mark Calcavecchia withdrew at the last minute. Hearn made the cut, and finished T32.

Hearn admits he didn’t play that well during the FedEx Cup playoffs, but he did have a strong final round at the Deutsche Bank Championship, shooting a 6-under-par 65.

“It was fun. To have a round like that, I’ll have a lot of confidence moving into next year,” Hearn says.

Despite what the calendar reads, the 2015 season begins anew in just a few weeks at the Frys.com Open, and Hearn will be in the field. Since finishing his season at the Deutsche Bank, Hearn has been spending time at his Branford, Ont. home.

Hearn was welcomed at Thornhill – the host course of the 2014 Canadian Junior Girls Championship – by representatives of Dunning Golf, one of Hearn’s new sponsors from 2014.

Dunning, a premium line of clothes engineered for golfers who are serious about the game, fits with Hearn’s professional persona.

“It’s the right choice for what my image should be,” explains Hearn.

That image is one of a man who admits he wouldn’t wear anything from Rickie Fowler’s closet, a man who is determined to be the best golfer he can be, and, of a family man.

There will be a new distraction in Hearn’s life in a couple of weeks, as his wife, Heather, is due with their second child at the end of October.

“Being a parent is so much fun. It’s so fun to teach our kids and see their minds take in the world around you,” Hearn says. “It makes you realize how lucky we are to play golf and travel the world.”

For Hearn, he hopes that world travelling continues over the next two years. Especially with the Presidents Cup taking place in South Korea in 2015, and of course, the Olympics in Brazil in 2016.

Hearn says that although he didn’t think too much about the Presidents Cup in 2013, once Graham DeLaet got on the team, he realized it wasn’t out of reach.

“I thought, ‘holy jeez, I wasn’t too far off that myself,’ and it was something that would be a big goal of mine,” he says.

“We have younger guys coming on Tour. Adam (Hadwin) has been playing great golf and I think he’s going to come on Tour and continue to play great. There’s going to be lots of Canadians on Tour for a while,” says Hearn. “We all want to see the next Canadian win, and the next Canadian at the Presidents Cup.”

Hearn’s goals are lofty, but not unattainable. He wants to get to the Tour Championship, and hopefully make the Presidents Cup team too. He’s putting in the work now to get there.

And this is why David Hearn is focused.