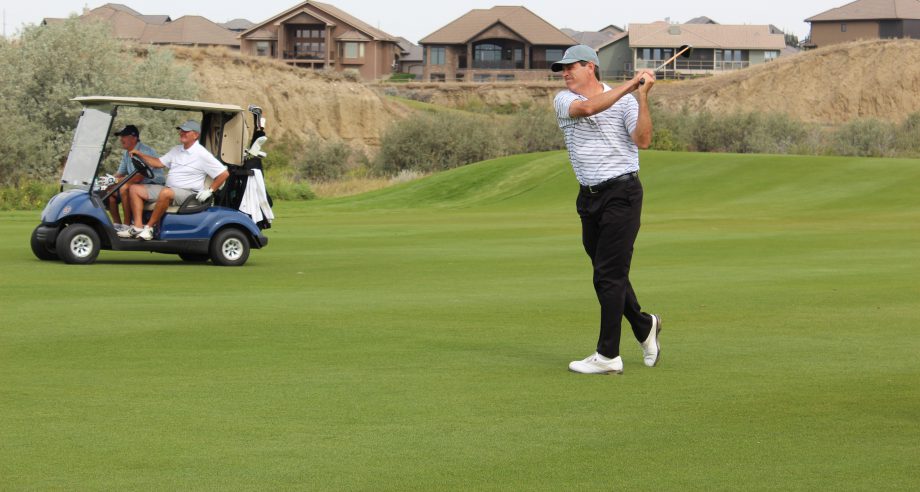 MEDICINE HAT, Alta. – Strong winds and the ensuing unplayable conditions during day two of the 2015 Canadian Men’s Senior Championship forced the suspension of the second round at Desert Blume Golf Club in Medicine Hat, Alta.

Players that were unable to complete their first rounds on Tuesday due to suspension of play did so on Wednesday morning. The same windy conditions experienced on the competition’s first day resurfaced on day two and forced play to be suspended at 3:30 p.m. MDT. The third round has been cancelled and the competition will be reduced to 54 holes.

“It is unfortunate that we have had to shorten the championship, but we wanted to ensure that the tournament is fair to all players. Resuming the second round tomorrow will provide optimal playing conditions for the field,” explained Tournament Director Mary Beth McKenna. “It was a difficult decision, but we concluded it wouldn’t be feasible to complete 72 holes due to limited amounts of daylight and time.”

Ideal conditions began the day and saw low scores from players beginning their first rounds. Leading the way in the morning was Pat Thompson of Asheville, N.C., who shot a first-round 7-under 65 – a senior’s course record.

“I was hitting it stiff. Most of the birdies were within five feet,” said Thompson, who carded five consecutive birdies from holes four to eight before adding three more on the back nine.

“When I could have made bogies I was saving pars. I just started to hit the ball right where I wanted to every time, just over and over. A couple of times, I missed a little bit and I happened to hit it above the hole and it would feed down closer and I’d end up with five feet again,” said the 2014 Georgia Senior Invitational champion.

One stroke back is Ronald Kilby, who shot 2-under through nine holes before his second round was suspended. The McAllen, Texas native opened with a 4-under first round and sits 6-under par through 27 holes.

Team Alberta leads the Inter-Provincial team competition through one completed round of play. Floyd Kilgore of Grimshaw, Alta., and Calgary natives Howard Broun and David Schultz totaled a combined 1-under par 143. Two shots behind the host province are Teams Manitoba, Ontario and British Columbia who sit tied for second at 145.

In addition to the Inter-Provincial team competition, the Super Senior division is also played concurrently over the championship’s first 36 holes. Leading the 70-and-over competition is Ken Bradley of Moose Jaw, Sask., who carded 10-over par in his first round. Two shots back is George Stokes from New Hamburg, Ont., who completed the first 13 holes of his second round before play was suspended.

The 2015 Canadian Men’s Senior champion will earn an exemption into the 2015 U.S. Senior Amateur at Hidden Creek Golf Club in Egg Harbor Township, N.J., from September 26 to October 1.

The second round of the Canadian Men’s Senior Championship will continue on Thursday at 8 a.m. MDT. Scoring, pairings and start times can be found here.