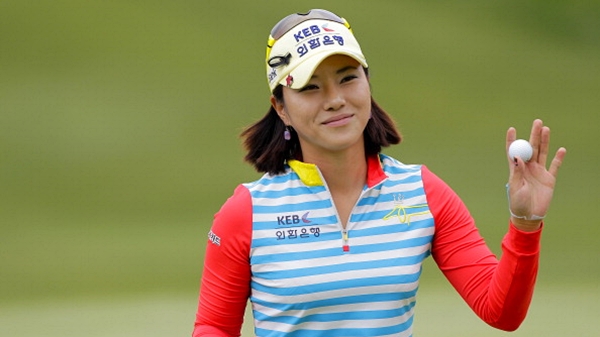 WILLIAMSBURG, Va. – Hee Young Park topped the leaderboard at 8 under Friday in the suspended second round of the Kingsmill Championship.

“Last week I rested like whole week, so I can I think more focus on the course and I’m ready,” said Park, a two-time winner on the LPGA Tour. “Yesterday more hard ground, so a bit tough to hit solid, hit the ball. But today more soft fairway, everything, so it helped a lot. So more comfortable today. A lot of ice, good food, good sleep.”

The second-ranked Lewis, in position to take the top spot in the world ranking from Inbee Park, had a 65.

“Definitely have a better feeling coming off the course today,” Lewis said. “Just feel like I played a lot more solid, hit the ball better, definitely had more control going into the greens. I think less wind helped there. Just stayed really patient and made a few putts, and added up to a pretty good score.”

Lang finished with a 68.

“I’ve been playing really well and working really hard just trying to be confident out there and committed to my shots,” Lang said. “Working on a few things, so good first two days.”

Thompson, Munoz and Salas were unable to finish the round because of darkness after the start of play was delayed 3 1/2 hours because of overnight rain. Thompson, the Kraft Nabisco winner, and Munoz had five holes left, and Salas had seven remaining.

Coming off a victory two weeks ago in the North Texas LPGA Shootout, Lewis would jump to No. 1 with a victory or a solo second-place finish, as long as third-ranked Lydia Ko doesn’t win. Ko, 2 under with six holes left in the round, needs a victory to move to No. 1. Inbee Park is skipping the tournament.

“I’m excited,” Lewis said about her lofty spot on the leaderboard. “This is a position I love to be in. I love giving myself a chance to win. I’m right where I need to be. I just got to keep staying patient and get a few putts to fall.”

Canada’s Alena Sharp was tied for 12th at 4-under par when the horns sounded Friday. Lorie Kane was at even par and tied for 42nd.