Help from above… And golf’s rules 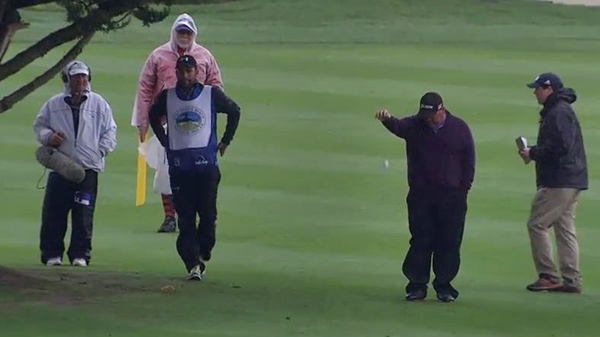 In the final round of the 2014 AT&T Pebble Beach National Pro-Am, Kevin Stadler’s ball found its way into an interesting location – nestled into a tree, which lined the fairway on the par-5 18th hole.

Stadler, recent champion of the Waste Management Phoenix Open, had his errant tee shot retrieved from the tree by Jordan Spieth’s caddie.  You can see from the video below that there is some debate as to who – or what – is in the tree.

Some of our inquisitive members inquired following the situation on Sunday afternoon as to why and how Stadler proceeded in the manner in which he did, by dropping the ball beneath the tree, which previously housed his ball.

This wasn’t the only recent misadventure Stadler had with his ball finding foliage on the golf course, as he made an unfortunate double-bogey last week before claiming the Waste Management Phoenix Open.

If the player deems his ball to be unplayable, he must, under penalty of one stroke:

a) Proceed under the stroke and distance provision of Rule 27-1 by playing a ball as nearly as possible at the spot from which the original ball was last played (see Rule 20-5); or

b) Drop a ball behind the point where the ball lay, keeping that point directly between the hole and the spot on which the ball is dropped, with no limit to how far behind that point the ball may be dropped; or

c) Drop a ball within two club-lengths of the spot where the ball lay, but not nearer the hole.

When proceeding under this Rule, the player may lift and clean his ball or substitute a ball.

From the video, we can presume that Stadler invoked either option b or c from Rule 28 as outlined above.  Decision 28/11 provides guidance when a ball is unplayable in a tree and the player opts to take relief at the expense of a one-stroke penalty:

Q. A player’s ball is eight feet off the ground, lodged in a tree. The player deems the ball unplayable. May the player proceed under option c of Rule 28 which permits him to drop a ball within two club-lengths of where his ball lay unplayable?

A. Yes. The player would be entitled to drop a ball within two club-lengths of the point on the ground immediately below the place where the ball lay in the tree. In some instances this may allow the player to drop a ball on a putting green.

The caveat to the procedure noted above – and the reason for Speith’s caddie scaling the tree to retrieve Stadler’s ball – is that the player is required to find and identify his ball.  The necessity in finding and identifying the ball not only satisfies that the ball in the tree is in fact Stadler’s ball (allowing him to proceed under Rule 28b or c), but also provides a point of reference, as required, to proceed under Rule 28b or c.

For the second week in a row, we’ve seen how the world’s best golfers can use the Rules of Golf to their advantage and hopefully you can employ the use of Rule 28 correctly, if you find your ball in an unplayable position.