Henderson 3-shots back at Volunteers of America Texas Shootout 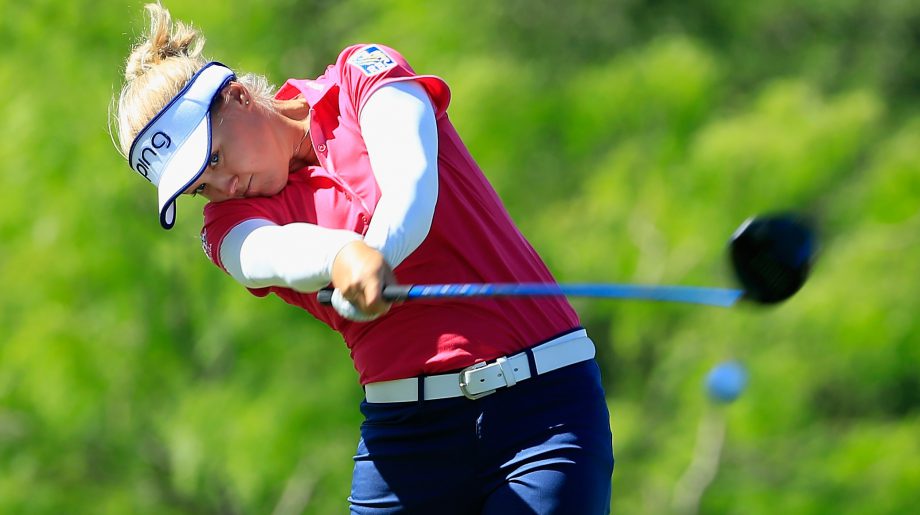 IRVING, Texas – Mi Jung Hur topped the Thursday in the Volunteers of America Texas Shootout, opening with a 5-under 66 in breezy conditions.

Hur made five straight birdies on the 15th to the first hole. The two-time LPGA Tour winner bogeyed the par-4 fifth and rebounded with a birdie on the par-4 eighth.

“My putting just was everything on the course today,” Hur said. “My shot wasn’t that good and my address wasn’t that comfortable, but my putting did really well.”

She lives in the area in McKinney.

“I used to live in Orlando, Florida, for seven, eight years,” Hur said. “Then we had a tournament here three years ago and I look around, it looks pretty nice to live. So I just asked my parents, ‘Can we move to Texas?’ We love it because there’s two big Korean towns nearby. We just moved right away.”

Piller, the U.S. Solheim Cup star who lives in nearby Plano, birdied four of her last seven holes.

“It’s a little tougher this week being a home game and having family in town and just staying at home,” Piller said. “It’s hard to go home and go to bed. You want to do the dishes or stuff like that. Definitely. have to be more conscious with your time and how you prepare just like any other week because you’re at home and it’s kind of pulling you opposite directions.”

She tied for third Sunday in California in the Swinging Skirts LPGA Classic for her third straight top-six finish.

“I know that I’m playing really well and I’ve had some really good finishes, so that’s golf, you’ve just kind of got to ride that and just keep pressing on,” Piller said.

“Even when I missed, I was still able to putt it. I was just off the green,” Ryu said. “I think today my shot was really great, I just comfortable with everything and like driver, iron, wood, everything was great. Even putting was really great.”

Ji had five birdies in an eight-hole stretch and dropped her only stroke on the par-5 18th.

“I’m really struggling with my allergies, so I’m trying to focus more,” Ji said. “I think flower seeds, something like that. I took all this medicine, but it doesn’t work at all.”

Fifth-ranked Brooke Henderson had a 69. The 18-year-old of Smiths Falls, Ont., has eight straight top-10 finishes.

“Not as windy as some of the weeks we’ve been playing in, but it was windy out there today,” Henderson said. “The course is in great shape, but as the day got going it got a little bit firmer and you kind of had to adjust your numbers a little bit.”

Hamilton’s Alena Sharp shot a 71. Team Canada Amateur Team member Maddie Szeryk – a dual citizen of Canada and the U.S. – had a 73.

Fourth-ranked Stacy Lewis opened with a 74, and third-ranked Lexi Thompson had a 75. Lewis, the 2014 winner in her home-state event, is winless in 47 events.

Michelle Wie shot a 76, four days after withdraw during the final round of the Swinging Skirts because of neck spasms. She’s winless since the 2014 U.S. Women’s Open and hasn’t had a top-10 finish in 33 events.

Second-ranked Inbee Park, the 2013 and 2015 champion, is sidelined by a left thumb injury.