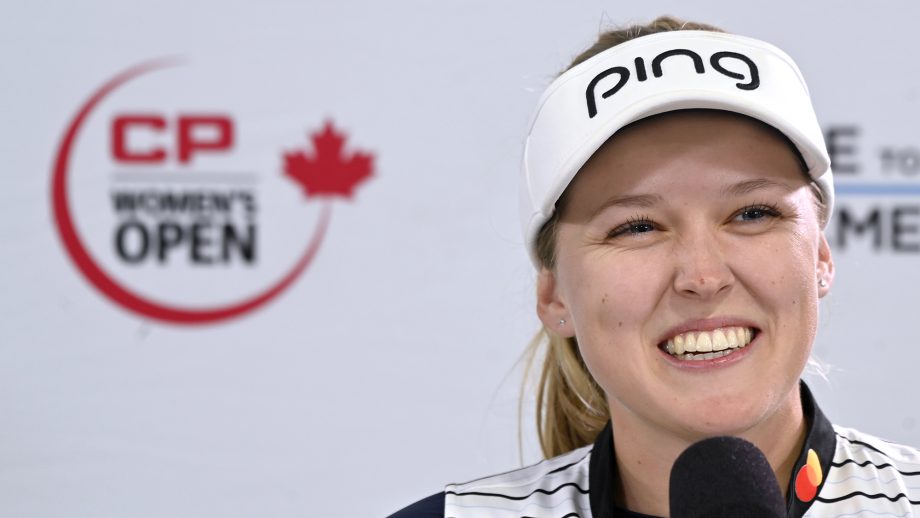 AURORA, Ont. – Brooke Henderson remembers being rather star-struck when she made her first appearance at the CP Women’s Open.

It’s a feeling that fellow Canadian Michelle Liu is experiencing herself this week at the Magna Golf Club.

Henderson played in the 2012 tournament in Coquitlam, B.C., at age 14, about two years older than Liu is now. She recalled her friendship with fellow Canadian Alena Sharp taking root at that event and also being stunned that four-time LPGA Tour winner Lorie Kane knew who she was.

“Just walking around the clubhouse with the best players in the world when you’re 14 years old and trying not to ask for autographs,” she said with a smile. “I think (that) was probably the hardest thing.”

Now Henderson, the defending champion and a nine-time winner on the LPGA Tour, is one of the star players that juniors like Liu are excited to meet.

Liu chatted with Henderson on the driving range Monday and played practice rounds with Christina Kim, M.J. Hur and Daniela Darquea. The Vancouver amateur earned a spot in the field by finishing as the low Canadian at the 2019 Canadian Women’s Amateur Championship.

“She seems very nice, a very sweet girl,” Henderson said. “It’s pretty cool that she got an invite to play here.”

Liu will be 12 years nine months and six days old when first-round play begins Thursday, making her the youngest golfer to play in the 47-year history of Canada’s national women’s championship.

“I’d definitely say crazy is a good word for it,” Liu said of the experience so far. “I would say I’ve got to play with some really nice and really good LPGA players. Christina Kim, M.J., and all of them.

“I think I really got to learn something from them and especially how warm and welcoming they are to me.”

Henderson, from Smiths Falls, Ont., previously held the record for youngest player at this tournament.

Liu won’t be the youngest to ever play in a national championship on the LPGA Tour. American Lucy Li qualified for the U.S. Women’s Open as an 11-year-old in 2014.

Liu drew raves from Kim after they played the back nine together Monday.

“Can’t wait to watch her golf career, and her stroke is pureeeee!” Kim said in an Instagram post. “Made nearly everything she looked at!”

Liu, who took up the sport at age six, will start Grade 8 in a couple weeks. She turns 13 in November.

After coolly dropping a 12-foot putt on the 15th hole on Tuesday, Liu was greeted by several autograph seekers on her way to the next tee.

“I feel like I’m getting pretty famous,” she said with a laugh. “It’s a new experience for me, so I would say that’s definitely pretty cool.”

Liu is one of five Canadian amateurs on the 156-player entry list. The others are Celeste Dao of Notre-Dame-de-l’Ile-Perrot, Que., Emily Zhu of Richmond Hill, Ont., Brigitte Thibault of Rosemere, Que., and Mary Parsons of Delta, B.C.

Henderson, meanwhile, has been her usual steady self on Tour this season. She has traditionally been quite comfortable in the role of defending champion.

She won her first LPGA Tour event at the Cambia Portland Classic in 2015 and defended the title in ’16. The 21-year-old also won the LOTTE Championship for the second time in a row last April.

Henderson won last year’s CP Women’s Open at Regina’s Wascana Country Club and will be the star attraction this week in her home province.

“I’m going to give it all I have, my best shot,” she said. “I think it’ll be extremely hard to repeat. It’s just facts, I think. Like I said, I’m going to give it my all, see what I can do, and hopefully post a solid round on Thursday and give the fans something to cheer about.”

A strong field is confirmed for the US$2.25-million tournament. Nine of the top 10 players on the LPGA money list are entered, including Jin Young Ko of South Korea, American Lexi Thompson, Ariya Jutanugarn of Thailand and Sung Hyun Park of South Korea.

The par-72, 6,709-yard course has rather wide fairways and large, undulating greens. A total of 96 bunkers will be in play and nine holes have water features.

Warm, dry weather conditions are expected through the week.

Kane is playing the tournament for a record-setting 29th time, moving the Charlottetown native ahead of JoAnne Carner for most all-time appearances at Canada’s women’s golf championship.

There are more television options this year with TSN and RDS providing coverage of all four rounds along with the Golf Channel. There was no domestic broadcast or simulcast of the 2018 tournament.

When Henderson led after 54 holes last year, Bell Media and the Golf Channel reached an agreement to allow Canadian viewers to watch the last three hours of the final round live.

Click here for more information on the CP Women’s Open.