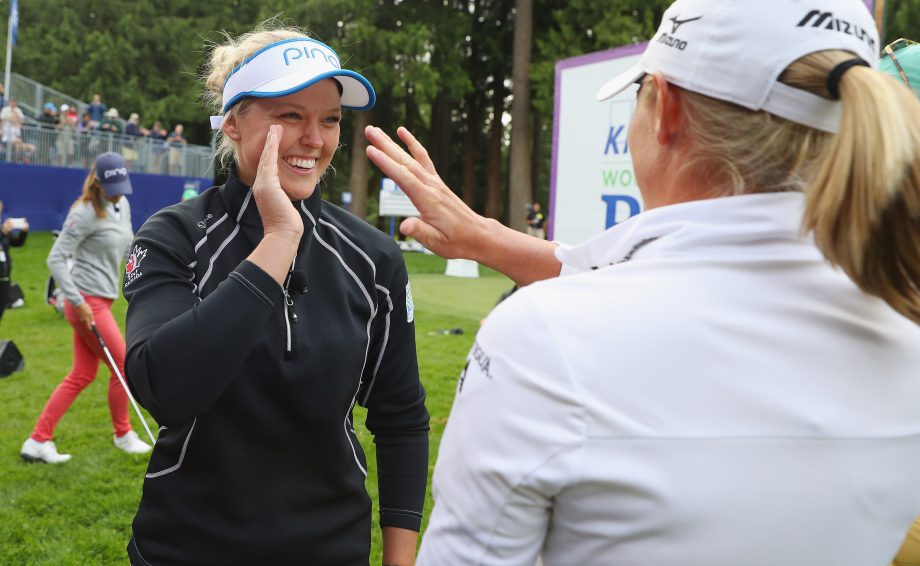 SAMMAMISH, Wash. – Just three holes into her round, Brooke Henderson could tell she needed a spark.

Her fourth career hole-in-one and a new car – to be donated to her caddie sister – did more than enough.

Made good on my promise to Brit…she gets the hole-in-one car!! Thanks for the right yardage, sis @Titleist pic.twitter.com/TY71epKALA

Buoyed by the early ace and birdies on her final two holes, Henderson took the early lead Thursday in the Women’s PGA Championship, the second of the LPGA Tour’s five major championships.

The 18-year-old Canadian, ranked fourth in the world, had a 4-under 67 on a cool day at Sahalee Country Club. Henderson aced the 13th hole – her fourth hole of the day – hitting a 7-iron from 155 yards to the left side of the green. The shot caught the apron and funneled directly to the cup.

“It really helped out a lot and gave me momentum for the rest of the day,” Henderson said.

Henderson, form Smiths Falls, Ont., was at 3 under after making a birdie at the difficult par-4 18th – her ninth hole of the day – which yielded just five birdies among the early players. But she began to struggle with her driver, hitting the ball left off the tee on three straight holes to start her back nine and dropped two shots.

Henderson rebounded with birdies on three of her final four holes. She capped the run with a short putt on the par-3 ninth to take a two-shot lead.

“Making the turn I was a little shaky,” Henderson said. “Hit a couple of bad drives. But I was able to scramble, get up-and-down a couple of times that really saved my round and then finished really strong.”

Henderson won in Portland last year and has nine top-10 finishes this season.

Christina Kim and I.K. Kim followed at 69, with the afternoon wave still on the course.

Top-ranked Lydia Ko had an even-par 71 in a round that featured 14 pars, two birdies and two bogeys. Both of Ko’s bogeys came after she missed the fairway and had to pitch out from the trees.

Christina Kim was at 2 over after three holes before rallying on her second nine.

“This place has absolutely drained me. I’m very, very thankful I was able to play early today,” said Kim, fourth last week in New Jersey after finishing second the previous week in Michigan.

After seeing above average temperatures earlier in the week that dried out the fairways and greens, players were treated to much cooler conditions on Thursday with rain showers popping up in the afternoon. The cooler, wet conditions are expected to last through the weekend.

Three-time defending champion Inbee Park was in the featured group in the afternoon. The 27-year-old Park will become eligible for the LPGA Hall of Fame at the completion of the round, making her the youngest player in tour history to reach the eligibility threshold and the first since Se Ri Pak in 2007.

Pak withdrew after seven holes Thursday afternoon due to an arm injury.

No one caught Henderson’s ace on camera, but there is footage of the after scene.

Thx to our Japan TV Partner WOWOW, they captured @BrookeHenderson on the green after her hole-in-one @KPMGWomensPGAhttps://t.co/Y9MKl6mKle