Henderson charges into a share of lead at ANA Inspiration 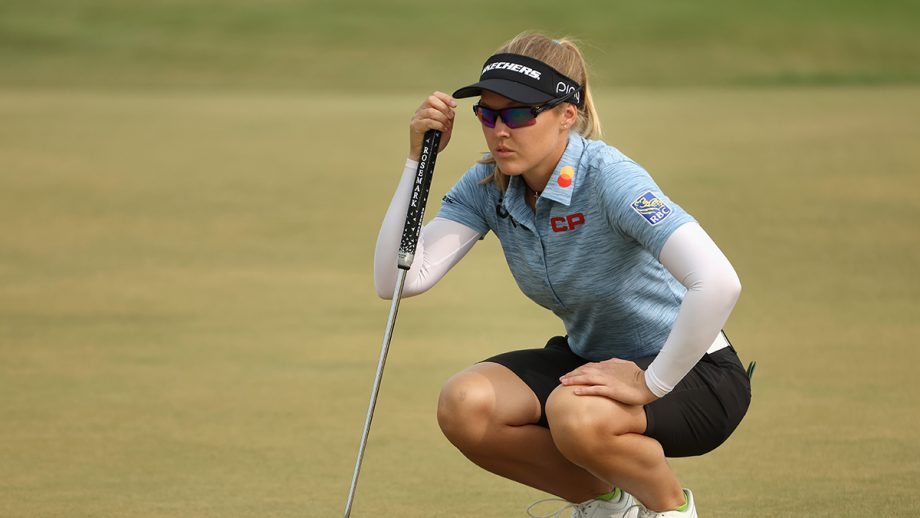 RANCHO MIRAGE, Calif. – Canadian Brooke Henderson tied a Mission Hills record with a 30 on the front nine and did just enough the rest of the round Saturday for a 7-under 65 and a share of the lead with Nelly Korda in the ANA Inspiration.

Henderson, from Smiths Falls, Ont., started the weekend six shots behind and wanted only to get as close to the lead as possible. Now she goes into the final round with a second major championship in her sights.

Korda began with a two-shot lead and fell three shots back with a rough stretch on the front nine, particularly the sixth hole by hitting 5-wood through the fairway into the gnarly rough and not getting over the water, leading to double bogey.

She rallied with three birdies on the back nine, however, for a 71 that allowed her to join Henderson at 12-under 204.

Highlights from her 7-under 65 👇🏼 pic.twitter.com/1RDDOaUDfk

They have a two-shot lead over Lexi Thompson (69), Mirim Lee (71) and Katherine Kirk, who quietly went about her business with a 67 that landed the Australian in the final group.

“Sort of an easy start which was nice, and relaxed a little bit,” Henderson said. “Being moving day, I wanted to get a solid round out there and try to climb the leaderboard as much as possible. Still a lot of golf to be played, but nice to see my name up there. And hopefully, tomorrow I can post a similar round.”

It was the hottest day of the tournament, the temperature climbing just past 100 degrees late in the day, helped by a mild haze from California fires that kept the sun from burning brighter. Korda was among those with an umbrella on the back nine to fend off the sun.

.@BrookeHenderson is your clubhouse leader at 12 under heading into major championship Sunday at the @ANAinspiration 🇨🇦 pic.twitter.com/6oouojlCyi

She laid up on the par-5 18th but left her wedge about 18 feet above the hole and had to settle for a par.

Thompson, four behind to start the round, got back in the game quickly with a two-shot swing on Korda on consecutive holes. Thompson holed a 35-foot birdie putt on the par-3 fifth, where Korda three-putted for bogey, and then Korda made her double bogey on the next hole. Thompson hit a short wedge to a foot to close out the back nine and appeared to be making her move.

Instead, that was the last birdie she made. Her best putt was a 15-footer for par on No. 13. She was among the few who went for the green on the 18th, sending it to the right and under the chair of a cameraman. She made a bold pitch down the hill to 5 feet and missed the birdie putt.

Ten players were separated by four shots, a group that included Carlota Ciganda at 9-under 207 and former Mission Hills winner Stacy Lewis another shot back.

Also at 8-under 208 was U.S. Women’s Amateur champion Rose Zhang, who shot a 68. The 17-year-old won the Amateur last month over Gabriela Ruffels, who was at 6-under 210 in a strong showing by amateurs this week.

Henderson began her round by missing a short birdie putt, which annoyed her only up until a 3-wood on the next hole to 12 feet that led to eagle, and she was on her way. She closed out her front nine with a pitch to 2 feet for birdie and a 30, and was only disappointed she didn’t pick up more on the back nine.

No matter. She was tied for the lead, more than she would have expected when she teed off. And while the Canadian viewed this round as moving day, Sunday might not be much different with so many players still in the mix.

That includes Kirk, a 38-year-old Aussie with three LPGA victories and one runner-up in her previous 59 appearances in major championships. She opened with two quick birdies and did enough to think about what it would be like to win the ANA Inspiration and take the plunge into Popie’s Pond around the 18th green.

“It’s so stinking hot out here and it would be great to cool off,” Kirk said. “I have a lot of hard work, and there are a lot of great players on the leaderboard so I’m probably going to have to go low tomorrow and it’s going to take a really good number. But anything is possible in this game.”