Henderson charges up leaderboard with a 64 in Rio 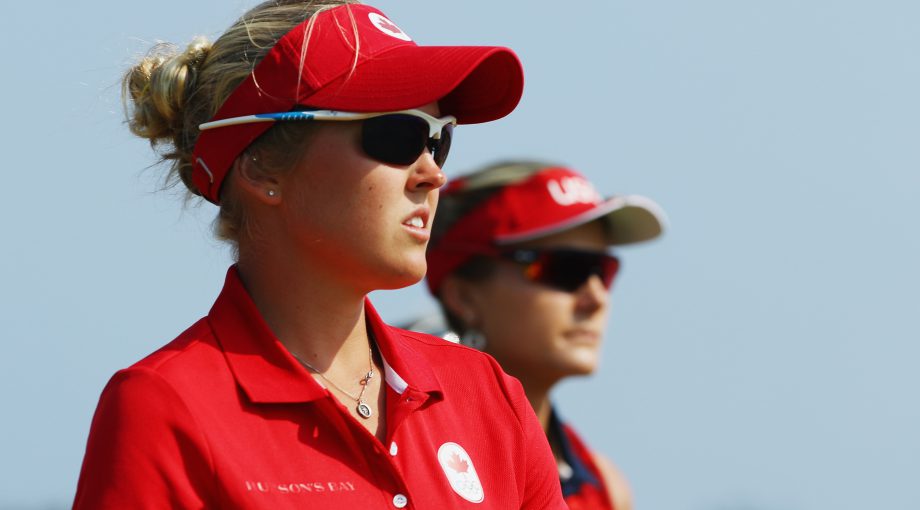 RIO DE JANEIRO – Team Canada’s Brooke Henderson shot a 7-under-par 64 and is tied for third following the second round of the women’s Olympic golf tournament.

Henderson birdied five of the final six holes Thursday to finish 2-shots back of leader Inbee Park of Korea.

“Yeah, it was a much better day today,” said Henderson, who was 1-under 70 following the opening round. “I felt better right off the bat. I was 2-under through my first nine holes, which was good, and I was hoping to get a few more birdies on the back nine, and I definitely was able to do that, especially my last six holes. I kind of got momentum and putts drained for me and I was able to hit some really good shots. I’m really happy with today and hopefully I’ll do something similar tomorrow.”

Round 2 interview with Brooke Henderson – LISTEN  I  READ

Henderson, from Smiths Falls, Ont., came into the day five shots off the pace set by first-round leader Ariya Jutanugarn. The native of Thailand carded an even-par 70 Thursday and moved into a tie for 8th.

The 18-year-old Canadian is 8-under for the tournament and trails 36-hole leader Inbee Park (10-under) who recorded a 5-under 66 for the second consecutive day.

Stacey Lewis is 9-under and in second place. The American was the lone golfer to better Henderson’s 64, shooting an 8-under 63.

Great Britain’s Charley Hull is tied for third with Henderson at 8-under.

Henderson will tee-off at 10:58 a.m. BRT with Nicole Larsen of  Denmark and Marianne Skarpnor of Norway.

Canada’s Alena Sharp is tied for 32nd place at 1-under. The Hamilton native tallied a 2-under 69 Thursday.

Sharp will tee off at 9:14 a.m. with Suzann Pettersen of Norway and Anna Nordqvist of Sweden.

Round 2 interview with Alena Sharp – LISTEN