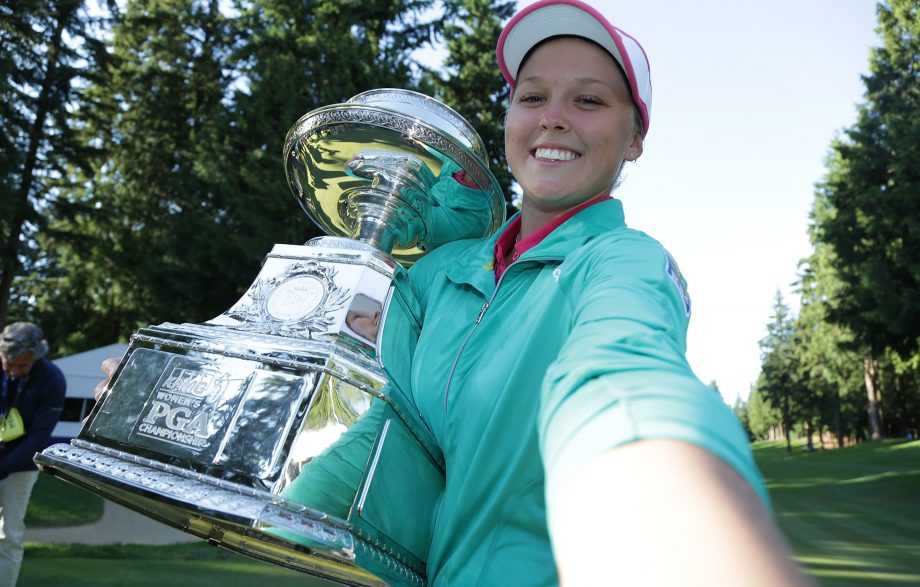 The magnitude of Canada’s most significant golf victory since Mike Weir won The Masters in 2003 was still sinking in Monday for Brooke Henderson.

Phone calls to her parents, responding to a stream of congratulatory text and Twitter messages – including one from Weir – and a road trip filled the hours after her first major win Sunday at the KPMG Women’s PGA Championship.

The 18-year-old from Smiths Falls, Ont., birdied the first hole of a playoff to beat world No. 1 Lydia Ko of New Zealand at the Sahalee Country Club east of Seattle.

From three sand saves, to a 90-foot eagle putt on No. 11, to getting out of tree trouble for par on No. 18, Henderson was a study in resilience and shot versatility in a 6-under final round.

The victory propelled Henderson into the No. 2 spot behind Ko in the world rankings. It also pushed Henderson’s season earnings to over US$1 million.

With a lot more golf to play in 2016, including three more majors and the Olympic Games, the Canadian has set her sights on overtaking Ko.

“This is huge momentum for sure,” Henderson told reporters Monday morning from Portland, Ore., on a conference call.

“Definitely a huge confidence booster. To get that world ranking up to No. 2 is kind of surreal, kind of unbelievable, but I still have one more spot to go.”

Henderson was in Portland promoting the Cambia Classic, which was the scene of her first LPGA victory last August.

She and her sister and caddie Brittany checked into their hotel early Monday morning following the three-hour drive from Washington.

They were to fly to Michigan later Monday for this week’s Meijer Classic, as well as meet up with parents Dave and Darlene.

The first Canadian woman to win a major since Sandra Post in 1968 had an inkling of her victory’s impact at home because of Weir’s example.

Henderson was five when a 32-year-old Weir won at Augusta.

She grew up with the knowledge a fellow Canadian could hoist one of golf’s most prestigious trophies despite the country’s short playing season.

“He really changed golf in Canada I think for everybody,” she said.

As Post put it Monday on the conference call “majors are forever and that’s sort of how you define careers.”

But Henderson is far from done defining her career. She turns 19 in September so her competitive upside is abundant.

The corporate world will take notice if they aren’t already, according to one sports marketing expert.

Given the limited advertising space on their clothing, the ideal for golfers is to have deep sponsorship deals with three or four companies as opposed to shallow contracts with many brands, says Brian Cooper of S & E Sponsorship Group.

“Has this win propelled her to the level where she’s being noticed by brands as a potential sponsor? Without a doubt,” Cooper said from Toronto.

“The fact that she’s a very attractive, Canadian, young female that sort of projects Canadian values with true grit the way she won yesterday, that is definitely going to work in her favour.

“She’s got to sustain it. If she wins another major or puts together three or four titles within the next 12 months, she’ll be well on her way.”

Henderson’s ascension from the two hundreds to No. 2 in the world in the span of a year coincides with golf’s re-entry into the Olympic Games in Rio in August.

“The Olympics is kind of an opportunity of a lifetime,” she said. “I’m very fortunate to look like I’m going to be representing Canada and be on that team.

“Winning a gold medal and defending that championship that the Canadian won over 100 years ago, it would be a lot of fun to bring that back home to Canadians.

“I know I have the whole country behind me cheering me on.”