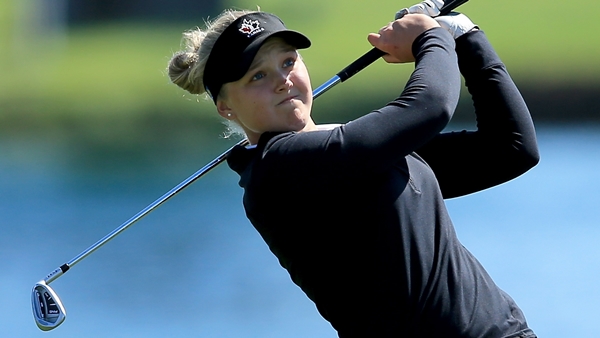 Smiths Falls, Ont. teenager Brooke Henderson carded a 69 to earn qualifying medalist honours and a spot in her first LPGA Tour event as a professional.

Another Team Canada Pro Squad member, Rebecca Lee-Bentham of Toronto, finished a shot back with a 70 to grab the other qualifying spot.

Hamilton, Ont.’s Alena Sharp is also in the field in Bahamas.

Henderson turned professional late last year after becoming the first Canadian female to hold the No. 1 spot on the World Amateur Golf Rankings. She just missed out on qualifying for the LPGA’s season-opener in Florida, finishing in a tie for third in the qualifier. Only the top two earned spots.

Instead of playing on the LPGA Tour last week, Henderson played a SunCoast Ladies Tour event in Winter Garden, Fla. She won the event and cashed a $2,200 cheque – her first as a pro.

Unlike Lee-Bentham who has conditional status on the LPGA Tour, Henderson does not have a regular tour to compete on. She is able to accept six LPGA sponsor’s exemptions and also qualifies for the 2015 U.S. Women’s Open in Pennsylvania by virtue of her top-10 finish last year.

Henderson also will try to Monday qualify for events, as she did this week.