Henderson moves into the top 15 at Women’s British Open 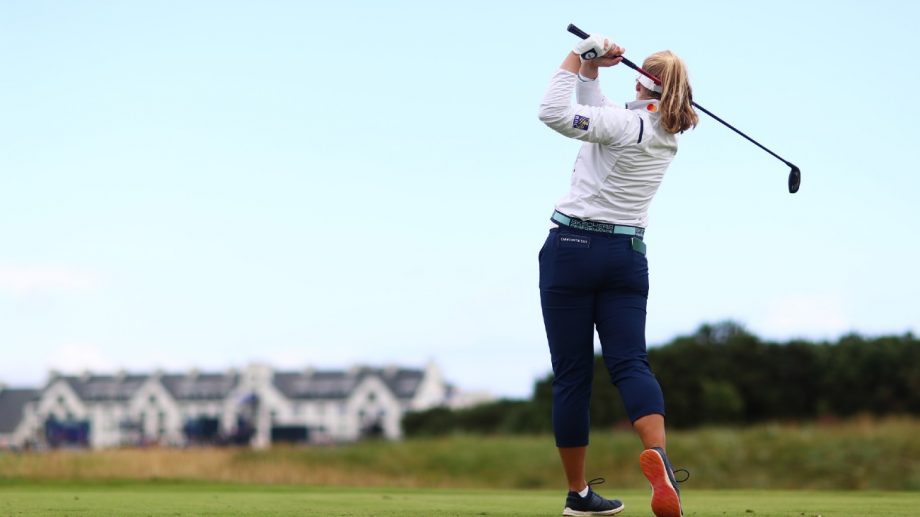 CARNOUSTIE, Scotland – Nelly Korda could barely raise a smile after tapping in for the first birdie of her second round at the Women’s British Open.

On a day her putter turned cold, it had taken 14 holes for the world’s top-ranked player to pick up a shot at Carnoustie.

Some of her big rivals had no such problems Friday.

Georgia Hall, the 2018 champion, overcame a double-bogey at the 15th hole the start of a brutal finish at the storied Scottish links course to shoot 3-under 69 and take a share of the 36-hole lead with Mina Harigae of the United States (67) on 7 under overall.

One stroke back was No. 4 Sei Young Kim (71), a major champion from last year, and Lizette Salas (69), who finished second to Korda at the PGA Championship in June.

Then came Korda in another large group on 4 under that included Canada’s Brooke Henderson. The native of Smiths Falls, Ont., moved into contention with a second round of 3-under 69. Henderson now sits tied for the 12th spot moving into Saturday’s round.

Korda, the new superstar of women’s golf and the recently crowned Olympic champion shot 1-over 73 and was one of only two players in the current top 16 on the leaderboard to shoot over par on another benign day when the wind held off and it felt almost balmy at times near the east coast of Scotland.

Hall was hoping that wouldn’t last.

“I think it’s about time it got windy,” Hall said, looking ahead to conditions at the weekend which are forecast to turn much more challenging. “It’s proper links golf and that’s what people want to see and I think it makes golf much more interesting when there’s a lot of wind. So I’m quite excited to play in it.”

Hall, who won her favorite event three years ago at Royal Lytham, rolled in six birdies in her first 14 holes to move into a one-stroke lead on 9 under.

The double-bogey 6 at No. 15 dropped her into what would shortly be a four-way tie for the lead and she parred her way home to join Harigae, who rolled in a long, winding birdie putt at the last to complete a round of 67 that contained seven birdies in all.

In the last five years at the Women’s Open, no player has more rounds in the 60s than Hall’s nine and that is filling the 25-year-old English golfer with confidence heading into the weekend.

“It is just so nice to play in front of the crowds. We missed that last year and to hear them cheering my name is great. I’m having a lot of fun.”

That’s something Korda didn’t seem to have.

Even making a big right-to-left putt for birdie at 17 failed to cheer up the world’s best player, who parred her first eight holes that were characterized by a series of missed putts from mid-range, even if her tee-to-green play was typically strong.

“I don’t think I hit it that bad,” Korda said. “The only thing I struggled on was making those putts and getting it close.”

Frustration got the better of Korda as she bogeyed No. 9, missing a putt from 8 feet, and No. 11 and further missed chances at Nos. 12 and 13 didn’t improve her mood.

The first of her two birdies came at the par-5 14th after she reached the green in two.

And at least she made it to the weekend.

Sophia Popov, last year’s unlikely champion at Royal Troon when ranked No. 304, double-bogeyed the last hole after three-putting to shoot 75 for a 3-over total.

Also missing the cut were No. 5-ranked Danielle Kang, who shot 76-75 and two British favorites in Charley Hull despite a second-round 71 and European Ryder Cup captain Catriona Matthew (75), the 2009 champion.

Laura Davies, who has played every Women’s Open since 1980, is sticking around, though. The enduring Englishwoman, 57, shot 70 and was even par for the tournament.