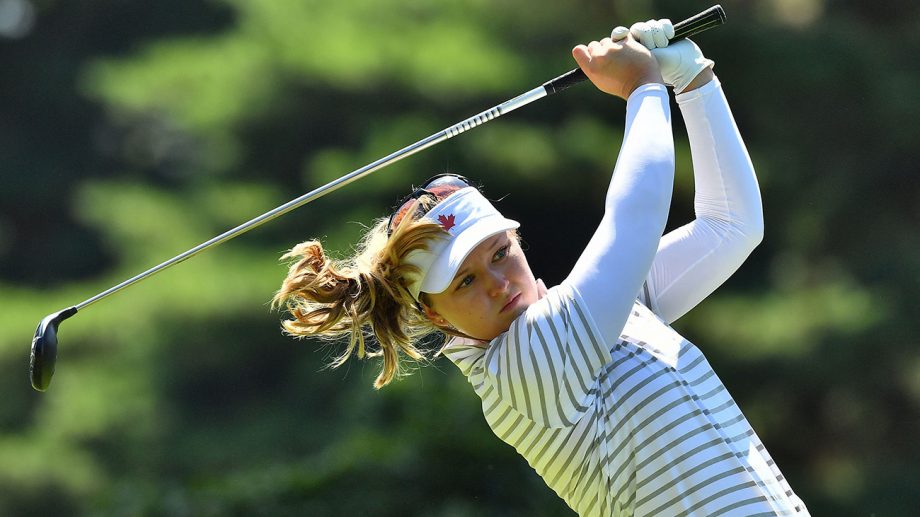 Canada's Brooke Henderson watches her drive from the 14th tee in round 2 of the womens golf individual stroke play during the Tokyo 2020 Olympic Games at the Kasumigaseki Country Club in Kawagoe on August 5, 2021. (Photo by Kazuhiro NOGI / AFP) (Photo by KAZUHIRO NOGI/AFP via Getty Images)
Golf Canada

Brooke Henderson of Smiths Falls, Ont., shot a 3-under 68, while Alena Sharp of Hamilton shot an even-par 71 in the second round of the women’s golf competition at the Tokyo 2020 Olympics.

Nelly Korda of the U.S., shot a 9-under 62 at Kasumigaseki Country Club to give herself a comfortable four shot lead over Denmark’s Nanna Koerstz Madsen and Emily Kristine Pedersen, and India’s Aditi Ashok, who are all tied at 9-under.

Korda made nine birdies in the second round, and an eagle on the par 4 sixth hole. A late double bogey on the 18th closed out her round.

Henderson made five birdies in the second round, after only making one birdie in the first and currently sits tied for 34th.

Her teammate, Sharp, made one bogey on the front nine, and one birdie on the back nine that put her in a tie for 46th at 3-over.

“I got to be a little bit more aggressive and take advantage of those holes that are up and roll some putts in,” Sharp said. “I’m not going to really change too much what I normally do. Like I mean I would love to go out and shoot a really low round, but we’ll see. Those putts got to drop.”