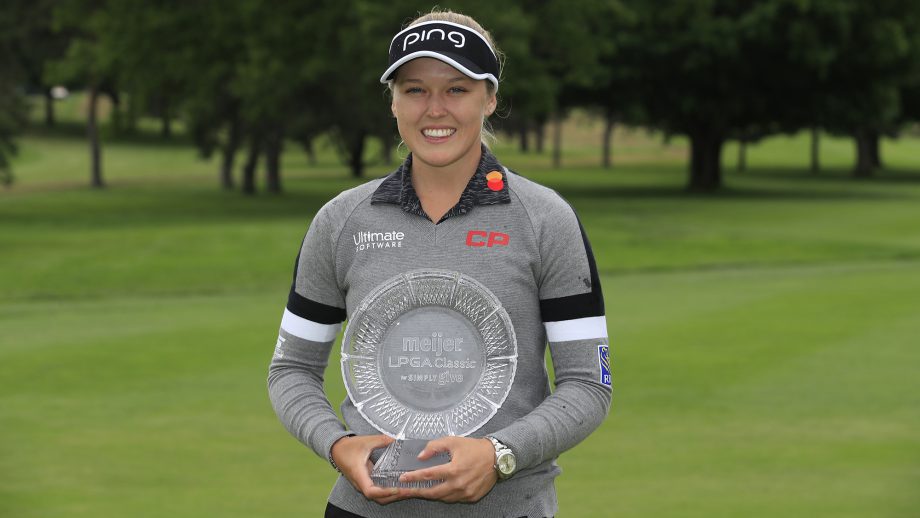 The 21-year-old Henderson led wire-to-wire for her second victory in three years at Blythefield Country Club, closing with a 2-under 70 in chilly conditions to hold off Lexi Thompson, Nasa Hataoka, Su Oh and Brittany Altomare by a stroke.

Henderson broke a tie with Sandra Post for the Canadian record on the LPGA Tour and also moved ahead of George Knudson and Mike Weir for the overall country mark.

“That’s really cool,” Henderson said. “Earlier this year to get my eighth win and to tie that record was a huge deal for me. To now to kind of breakthrough that is awesome. I’m just really excited for the rest of the summer and hopefully many more wins in the future.”

With caddie/sister Brittany and mother Darlene looking on, father Dave sprayed her with champagne to celebrate.

“It’s really special,” Henderson said. “I’m so happy that both my mom and my dad can be out here to watch my sister and I win this. It’s always special when they’re here, especially on Father’s Day.”

Also the Lotte Championship winner in April in Hawaii, Henderson matched the tournament record of 21 under that she set in 2017 (when the course played to a par of 71) and also was tied last year by So Yeon Ryu. Henderson opened with consecutive 64s, playing 30 holes Friday after rain delayed the start Thursday, and had a 69 on Saturday to take a two-stroke lead into the final round.

“It’s a lot like the courses I grew up playing back home in Canada,” Henderson said. “I love it out here. Just trying to hit good shots and hopefully make a lot of birdies. Didn’t make as many as I wanted, but just enough.”

The final putt at @MeijerLPGA that sealed the deal in Canadian #golf history 👏🏼👏🏼 pic.twitter.com/q9i2cIsFZz

Her lead reduced to a stroke after a bogey on the par-4 16th, she three-putted the par-5 18th from 45 feet for the winning par.

“When I was walking up here I thought maybe I would have to birdie or eagle this hole to get the job done, but when I looked at the scoreboard I was sort of shocked that all I needed to do was three-putt and par,” Henderson said. “I’m really grateful about that because I was shaking pretty bad on those last couple putts.”

Henderson had Canadians from coast-to-coast cheering her on all throughout.

“Congratulations to Brooke on becoming the winningest Canadian professional golfer ever on the PGA or LPGA,” said Sandra Post, Canadian Golf Hall of Fame Honoured Member. “I’m so happy for her and her family and for golf in Canada. I know there are many more wins in store.”

Win No. 9, so fine 🙌🏼🙌🏼 @brookehendersongolf wins one for the history books, becoming the winningest Canadian golfer of all time 😲😲 #LPGA #meijerlpgaclassic

“On behalf of Canadian golf fans across the nation, we are so proud of Brooke Henderson on her incredible 9th LPGA Tour victory,” said Laurence Applebaum, Golf Canada CEO. “She’s made Canadian golf history at 21 years of age and there is no doubt that the very best is yet to come for this inspiring young athlete. We can’t wait to celebrate this victory and the defense of her CP Women’s Open title this August at Magna Golf Club!”

Thompson followed her course-record 62 in the third round with a 68, closing with an eagle for the second straight day. The 2015 winner at Blythefield, she was coming off a victory last week in New Jersey.

“Unfortunately, I didn’t hit it that great today, but I made some really good putts on my second nine,” Thompson said. “I had a little bit of a muscle spasm in my shoulder all day, but it is what it is, you can’t control that. So, overall great week.”

Hamilton’s Alena Sharp had a strong tournament, finishing tied for ninth at 13-under with a final round of 72.

Calgary’s Jaclyn Lee (71) finished at 2-under while Anne-Catherine Tanguay of Quebec City (74) was at 1-under.

Jennifer Kupcho, four strokes behind Henderson entering the day, had a 76 to drop into a tie for 23rd at 11 under in her third professional start. The former Wake Forest star won the inaugural Augusta National Women’s Amateur in April.

The KPMG Women’s PGA Championship, the third major championship of the year, is next week at Hazeltine in Minnesota.