Henderson, Sharp inside top 5 in Hawaii 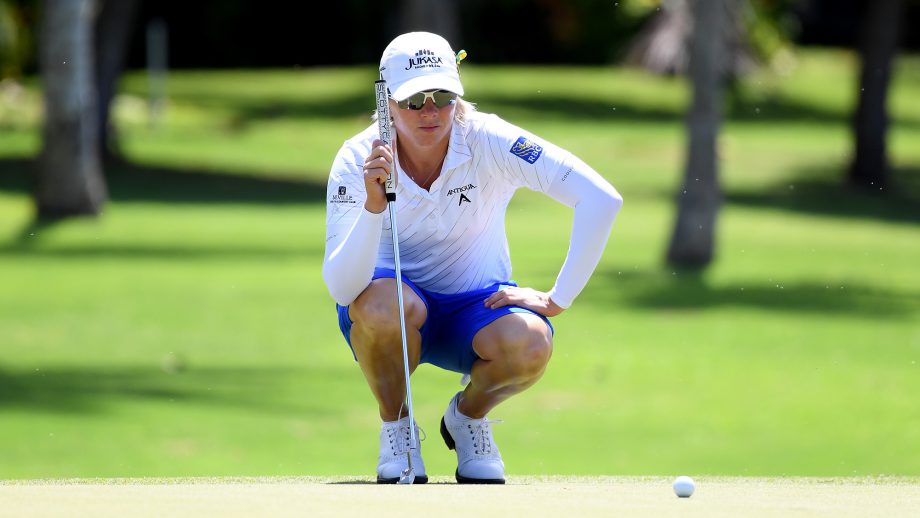 KAPOLEI, Hawaii – Canadians Brooke Henderson and Alena Sharp battled a windy first round at the Lotte Championship to both sit inside the top five though 18 holes of action.

Henderson, a Smiths Falls, Ont., native, carded a 4-under-par 68 to sit one back of Shanshan Feng, the early leader. Haeji Kang and rookie Martina Edberg are also shot back of in second place .

The 20-year-old Henderson is in search of her sixth victory. She is ranked 14th, while the pair she shares second with are a bit farther back. Henderson finished T11 at this event in 2017 and T10 in 2016.

“The wind was very strong today, quite challenging, especially on the back nine,” said Henderson. “But I was able to make a couple par saves to keep myself in it and make birdie putts when I could. I’m happy, and hopefully I can just do something similar the next few days.”

“Yeah, you know, to be able to honour them and to remember those that have passed away and all the survivors that are fighting for their life and overcoming the injuries that they had there,” added Henderson. “It was pretty terrible what happened. They’re in my thoughts and prayers.”

Sharp, a Hamilton, Ont., product, shot a 3-under 69 playing with a heavy heart.

“Yeah, it’s such a tragic thing that happened,” said Sharp after her 3-under 69 on Wednesday in Hawaii. “I played hockey growing up and we were on a lot of bus trips. You just can’t imagine what it’s like. They’re young men and it’s just so sad. I just wanted to show our support any way we could. We’re (LPGA) going to Saskatchewan this summer to the [CP Women’s]Canadian Open and we just wanted to show the community we’re there and supporting them.”

On Wednesday, Sharp tweeted a picture of the yellow and green ribbon she was wearing to honour the victims. Fellow Canadians Anne-Catherine Tanguay, Brittany Marchand and Maude-Aimee LeBlanc joined as well.

Here we go round 1 @LPGALOTTE All Canadian players and their caddies are representing Humboldt with these ribbons. Thanks @sarahsherpa for the thoughtful gesture #humboldtstong pic.twitter.com/AEvdF8IwfT

Marchand was even, Leblanc was 1 over and Tanguay was 9 over.

Top-ranked Shanshan Feng birdied three of her last five holes Wednesday to take the lead halfway through a windy first round of the Lotte Championship.

The Chinese star finished at 5-under 67 at Ko Olina Golf Club. She is the first golfer from China – female or male – to reach No. 1 in the world rankings. She insists she “gets more excited” in the wind, which should make Ko Olina an ideal site for her this week.

“A lot of people would be like worrying, thinking ‘Oh, my God, it’s so windy,”’ Feng said. “I wake up and I’m like, ‘Yeah, it’s windy.’ That’s why in this kind of situation I still stay patient on the course and still stay with my routine.”

Kang, from South Korea, stands at No. 295. Edberg, from Sweden, is ranked 850th in her first LPGA start. She was a two-time Big West Conference champion during her college career at Cal State Fullerton.

Defending champion Cristie Kerr shot 71 and called the conditions “an average wind for here.” She played with Hawaii’s Michelle Wie, the 2014 Lotte champ. Wie double-bogeyed her 15th hole to finish at even par.

“I feel like back in the day I was really used to the wind here because I played in it every week,” Wie said about one of her home courses growing up. “Now that I’m living on the mainland and come back I get a little surprised by it.”

Pernilla Lindberg shot 70 in her first start since beating Park in an eight-hole playoff in the year’s first major.