Henderson, Sharp one stroke back at Lotte Championship 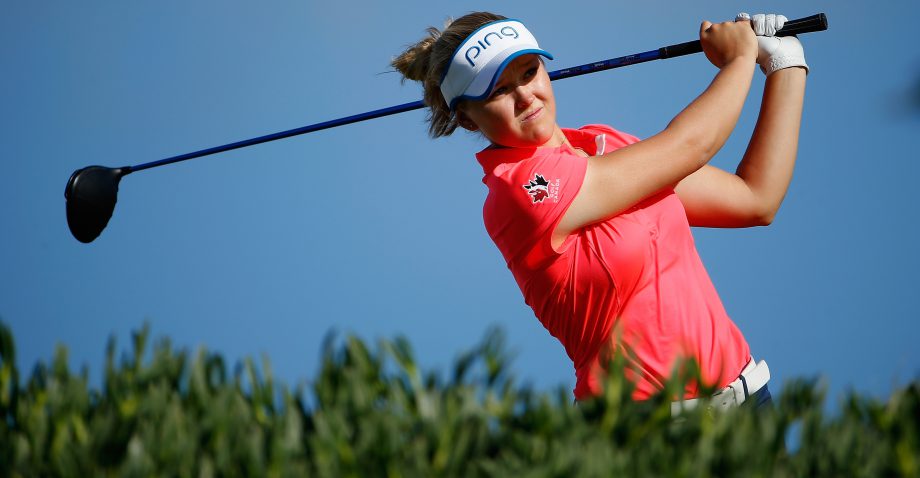 KAPOLEI, Hawaii – Australia’s Minjee Lee birdied her final hole Wednesday for a 4-under 68 and a share of the first-round lead with Thailand’s Moriya Jutanugarn at the LPGA Tour’s Lotte Championship.

In wind gusting to 30 mph at Ko Olina Golf Club, only nine players broke par in the morning wave, while 11 shot in the 80s. That included 2014 Lotte winner Michelle Wie with an 80 in her home event.

“It was just trying to hit it and go find it today,” said Jutanugarn, the 2013 rookie of the year, “because it’s really windy.”

Canada’s Brooke Henderson, the 18-year-old from Smiths Falls, Ont., who has finished in the top 10 in six straight events, was a stroke back along with defending champion Sei Young Kim, Kim Kaufman, fellow Canadian Alena Sharp from Hamilton and Caroline Masson.

It is Henderson’s first start at Ko Olina. She failed to qualify last year, when Kim holed out from the fairway for an eagle to beat Inbee Park in a playoff.

Top-ranked Lydia Ko is coming off consecutive victories in the Kia Classic and ANA Inspiration – the year’s first major. She had a double bogey on the second hole Wednesday, but rallied to shoot 71.

Jutanugarn’s younger sister, Ariya, led the ANA Inspiration by two with three holes remaining, only to finish fourth. Moriya, who has never finished higher than fourth on the LPGA Tour, managed seven birdies in the breeze at Ko Olina.

“I think the wind made me have more patience,” she said, “because sometimes you hit the bad shot and it’s like, ‘It’s OK. It’s windy today.’ You kind of accept it.”

She also had seven birdies in the opening round, to go with a bogey and double bogey. Lee admitted luck had a little to do with her score in the gusts.

“You got to have some luck with it, too,” she said. “It’s not just all your skill. You never know. Mother Nature can throw anything at you. I think I judged it really well today so I’m happy.”