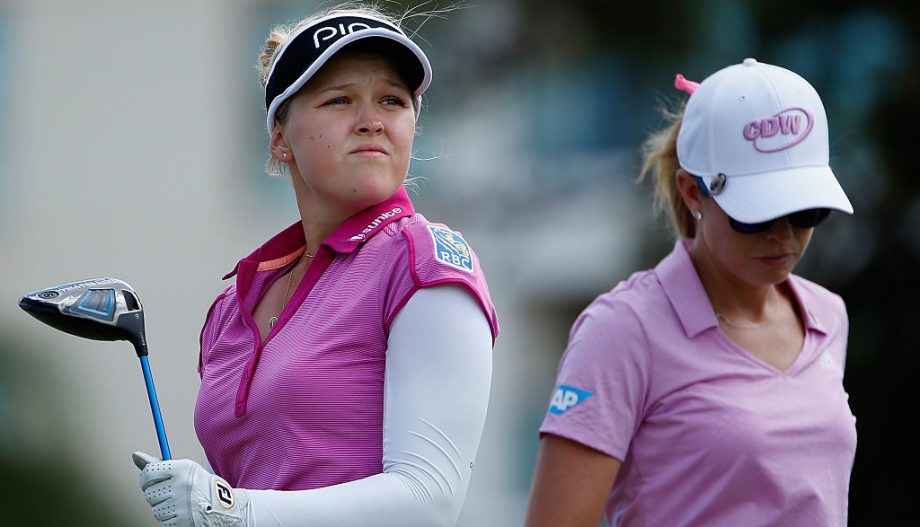 KAPOLEI, Hawaii – Minjee Lee made five birdies in a six-hole stretch and finished with a 6-under 66 on Thursday to take the second-round lead in the LPGA Tour’s Lotte Championship.

Playing in calmer afternoon conditions at wind-swept Ko Olina, the 19-year-old Australian birdied the final two holes on the front nine and added three in a row on Nos. 11-13. She parred the final five holes to finish at 10-under 134, two strokes ahead of American Katie Burnett.

“I holed a couple of nice putts and just got my momentum going on the front nine,” Lee said. “I birdied 8 and 9, so I think the momentum carried on through the back nine.”

She hit every green in regulation in her bogey-free round.

With constant wind gusting to 30 mph Wednesday, there were only seven rounds in the 60s and the average score was 74.6. It calmed Thursday and eight players shot 67 or better.

The 26-year-old Burnett matched Lee with a 66. Also playing in the afternoon, she birdied four of the first six holes and made two more on the consecutive par-5 13th and 14th holes.

“I putted really well and we’ve been really decisive on like targets and I’ve hit a ton of knock-downs,” Burnett said. “Maybe hit a handful of actually full shots. Pretty much everything has been a knock-down just to keep the ball a little straighter in the wind.”

Canadian Brooke Henderson was 5 under after a 70 in the afternoon. The 18-year-old from Smiths Falls, Ont., has finished in the top 10 in six straight events. Hamilton’s Alena Sharp was in a tie for 18th place.

B.C. native Samantha Richdale had a share of 48th, while Quebecors Anne-Catherine Tanguay and Maude-Aimee LeBlanc missed the cut.

Top-ranked Lydia Ko, going for her third straight victory, was 1 under after a morning 72.

Su-Yeon Jang was 7 under after a 66 in the morning when gusts were as high as 25 mph. The 21-year-old South Korean player, in the field on a sponsor exemption, is coming off a victory last week in a Korean LPGA event also sponsored by Lotte.

“I felt confident after winning the tournament last week,” said Jang, making her second LPGA Tour start and first in the United States. “So, that helped me a lot.”

Thailand’s Moriya Jutanugarn and defending champion Sei Young Kim were 6 under. Jutanugarn, tied for the first-round lead with Lee, had a 71. Kim had her second straight 69. The fifth-ranked South Korean player won last month in Phoenix for her fourth LPGA Tour title in two seasons.

Megan Khang made a big move up the leaderboard, following her opening 76 with a 64 – the best round of the week – to reach 4 under. The 18-year-old American birdied six of the last seven holes after some encouragement from her father-teacher-caddie Lee.

Third-ranked Lexi Thompson and Lizette Salas also rallied, each following a 75 with a 66 to get to 3 under.

“Yesterday was just a struggle on the greens,” Thompson said. “I don’t really know what was going on.”

Salas shot a tournament-record 62 three years ago before losing a playoff to Suzann Pettersen.

“I just erased the round from yesterday,” Salas said. “We knew the problem was I wasn’t getting close, so I really wanted to be aggressive whenever I had a short iron.”

U.S. Women’s Open champion In Gee Chun also was 3 under, shooting a 67 after opening with a 74.

Second-ranked Inbee Park was 1 over after a 71.

Michelle Wie missed the cut in her home event, following her opening 80 with a 73. She won the 2014 tournament.

“Disappointing for sure,” Wie said. “I wanted to play well this week. Just coming out here and not having a good performance, just definitely is disappointing. Take the weekend to practice and get ready for the next event.”

Two other players from Punahou School played this week, but only former UCLA All-American Stephanie Kono made the cut – shooting a 71 to reach 1 under. Amateur Allisen Corpuz, a high school senior who qualified, was 5 over after a 72.