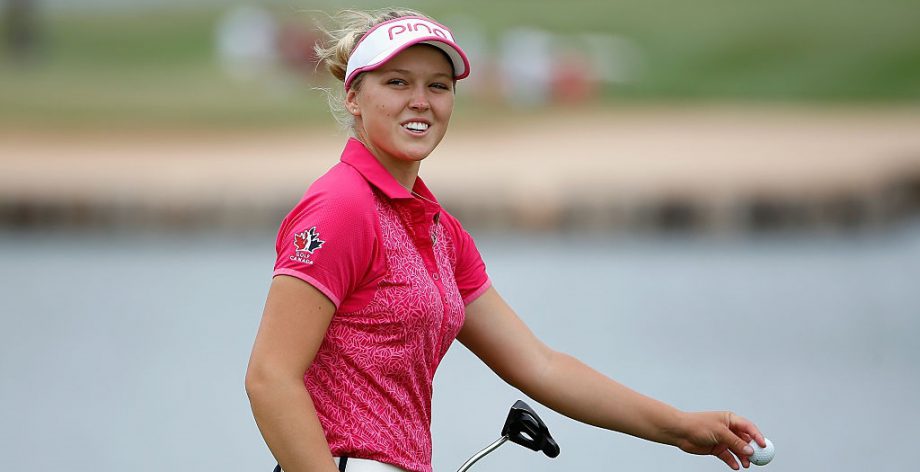 DALY CITY, Calif. – Haru Nomura shot a 1-under 71 in cool and breezy conditions Saturday at Lake Merced and escaped a two-shot penalty to maintain a three-stroke lead in the Swinging Skirts LPGA Classic.

The 23-year-old Japanese player met with rules officials after the round to discuss her play from an awkward stance in the left greenside bunker on the par-5 sixth hole.

“It was slopey, so I was trying to take a stance, but I kept slipping downhill, and in order to get a firm stance, I had to – even when I had to do a practice swing – I had to swing real hard, and when I did, I kept moving forward again and again,” Nomura said. “There was no option, but to move like that, but they were saying that I was moving excessively, but what I was trying to tell them was, ‘OK, then what is the guideline. There should be some sort of a standard, a regulation that explains what an infraction is and not.'”

The officials decided no penalty was warranted, leaving her with a par on the hole and a 10-under 206 total.

“For me the two-stroke penalty, it wouldn’t really have made a big difference,” Nomura said. “If I did something wrong, I have to accept it. But there was really no clear rule about what the guidelines were, so I would just focus on my game and just leave it at that.”

She won the Australian Women’s Open in February, pulling away to beat top-ranked Lydia Ko by three strokes for her first LPGA Tour title.

“You could say it’s confidence and you can call it what it is, but what I feel right now is I feel very comfortable about golf,” Nomura said. “I just want to have fun. I’m not thinking about trying to beat someone. It’s really about having fun.”

Ko was six strokes back at 4 under after a 73. The two-time defending champion will be 19 on Sunday.

“My game wasn’t really up to it today,” Ko said. “It was pretty average. But I felt like chipping, short game-wise it was good, but I wasn’t making the putts that needed to go in for birdie or those crucial par saves. … I’ve just got to stay positive.”

“Obviously, the conditions are going to be the same tomorrow probably, a little cooler, I think,” Pace said. “But just the same thing. On a course like this you have to play on the right side. You have to stay below the hole keep it in the fairway and on the greens.”

“It was tough,” Choi said. “I think especially the greens were so firm and a lot of holes have front pins, so it’s hard to stop the ball around the pin. … I like chasing, so I feel great about this tournament and this week and about my game. I have confidence, so just keep playing aggressive.”

So Yeon Ryu was 5 under along with Brooke Henderson, Catriona Matthew and Gerina Piller. Ryu, the first-round leader after a tournament-record 63, followed a second-round 75 with a 73.

Henderson has seven straight top-10 finishes. The 18-year-old Canadian chipped in for birdie on the par-5 18th for a 69.

“I kind of mis-hit my approach shot there, but was able to come back with a nice chip-in and make the day feel a little bit better than it was,” Henderson said. “I’m really close and my game is close to being really good. I just have to stay patient and keep doing what I’m doing.”

“It was really hard,” Piller said. “The pins were a lot tougher today. They put a lot of them on the front, and the course is firming up again. Yesterday it was pretty soft with the rains. But front pins make it pretty difficult to get it close. And the wind, you’ve got to accommodate for the wind, accommodate for the cold, so it just makes it a tough day.”

Minjee Lee also was 4 under after a 74. The 2012 U.S. Girls’ Junior champion at Lake Merced, the Australian won last week in Hawaii for her second LPGA Tour title.