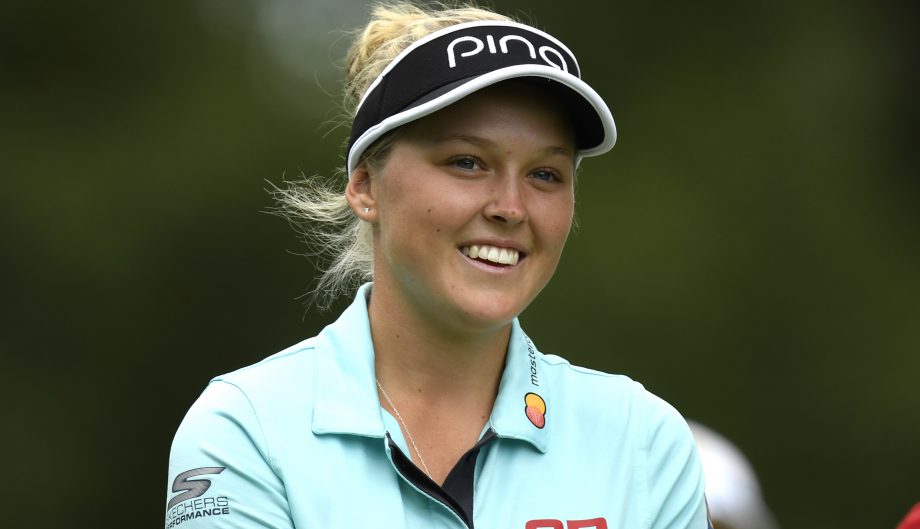 OTTAWA – Cristie Kerr waved at her caddy to stop for a second on the 18th fairway of the Ottawa Hunt and Golf Club. Mirim Lee and her bagman also held up.

Brooke Henderson, the third member of their trio for the final round of the CP Women’s Open, marched ahead with her sister and caddy Britt in tow, the standing ovation from the gallery theirs alone. Although Henderson had an even par round to finish at 7-under in a tie for 12th on Sunday, she was the star of the LPGA event all week and it was only fitting she had one last moment on the course with her legions of fans.

“It was amazing,” said Henderson minutes before accepting the Sandra Post Medal as the tournament’s low Canadian from the award’s namesake. “The crowds were incredible, and to have that support behind me from the very start of the week, Monday, when they were out here following me and cheering me on, it was so amazing.

“Today didn’t go quite as well as I would have liked, but still having that support around me was amazing, and I’m going to remember this week forever.”

South Korea’s Sung Hyun Park shot a 7-under 64 to finish at 13-under par to win the tournament, but she was almost an afterthought for the partisan crowd.

The 19-year-old Henderson, from nearby Smiths Falls, Ont., was on the covers of programs, played pro-ams, appeared on billboards, and did everything asked of her to be an ambassador for the event. On Friday, she almost missed the cut but birdied on her final hole of the second round to keep playing. The next day, Henderson fired a course-record 8-under 63 to rocket up the leaderboard and play in the second-last group in Sunday’s final round.

“She had so much pressure on her this week,” said Kerr, who played with Henderson in the first, second and final rounds. “You know, more than a major, I told her. I was joking around, but it was true. Look at the people out here for her, they all want her to do well, and she wants to do really well for them.”

Kerr tried to settle Henderson’s nerves when it looked like the younger player might miss the cut. When Henderson had a pair of bogeys in the front nine on Sunday Kerr was there again to cheer her up.

Then, of course, it was Kerr who insured that Henderson had one last moment in the sun at the Women’s Open, getting their group of golfers to slow their pace so the Henderson sisters could absorb the crowd’s applause.

What a week for the local favorite, @BrookeHenderson! ??❤️

“She’s a role model, I look up to her,” said Henderson of Kerr. “To play with her three days this week really helped me. Just things like that, letting me walk up on to 18 and soak in the crowd and all those cheers, that was just really a class act.”

Brittany Marchand of Orangeville, Ont., was the only other Canadian to make the cut out of a field of 14. She shot a 2-under 69 to finish at 3-under par on the tournament. Marchand, who was a sponsor exemption that usually plays on the Symetra Tour, also drew some crowds.

“They’re always cheering you on no matter how it goes,” said Marchand. “It’s nice to have that support backing you, especially playing at home. Now that I’ve played two LPGA events at home, I’m getting more support than I probably would if I was just playing in the States somewhere.”

The crowds were so vocal for Brooke Henderson that even her caddy Britt drew cheers with people calling out her name, encouraging her as she lugged her sister’s golf bag or gave advice.

“The crowds were so great all week and it’s so cool to play this kind of tournament at home and have that kind of crowd support, even the caddy,” said Britt. “It felt awesome.”