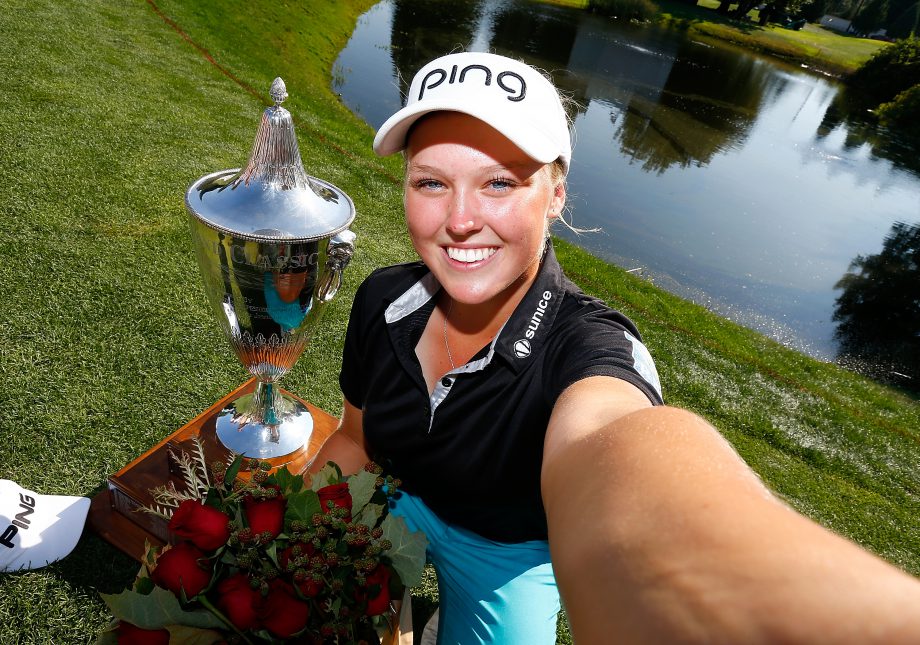 Listen to our full conversation with Brooke Henderson by clicking the media player below.

Brooke Henderson’s first LPGA Tour win didn’t stop her from having to play golf on Mondays.

Henderson completed an eight-stroke victory Sunday at the US$1.3-million Cambia Portland Classic to become the first Canadian to win an LPGA event since Charlottetown’s Lorie Kane in 2001 and the Tour’s third-youngest champion ever at 17 years 11 months six days.

She catapulted to No. 17 in the world rankings, boosted her earnings over $660,000 and secured her 2016 card, but because she’s exhausted all six of her sponsor’s exemptions she’ll have to continue playing Monday qualifiers to gain entry into tournaments for the remainder of this season.

Last year, Henderson petitioned the LPGA to allow her into Q-school but was turned down because she didn’t meet the minimum age requirement of 18. However other players —including second-ranked Lydia Ko and major champion Lexi Thompson — successfully petitioned to become Tour members before their 18th birthdays.

On Monday, Henderson said she continues to weigh her options regarding whether to again petition the LPGA Tour for an exemption.

“We’re still thinking about it and evaluating the situation options with my family and team,” the native of Smiths Falls, Ont., said during a conference call. “Hopefully we’ll come to a decision pretty soon.

“There’s many pros and cons to both options . . . I’m just kind of working through those right now with my team. We’ll see what happens.”

Henderson earned $195,000 with the win and has made $661,818 in 10 events. By not being a full-time Tour member, Henderson must rely on sponsor’s exemptions or Monday qualifying to participate in LPGA tournaments.

Henderson doesn’t have the luxury of time to relish her historic win. Her next tournament is the $2.25-million Canadian Pacific Women’s Open, which begins Thursday in Coquitlam, B.C., where the spotlight will be firmly fixed upon her.

She doesn’t expect to feel any extra pressure competing on home soil.

“I don’t think so,” she said. “It’s fun to be back home and I know all the people I’ve talked to earlier (Monday) have been very excited and (are) cheering me on this week.

“I just have to make sure I stick to my own gameplan and do my own thing to make sure I play well this weekend. I haven’t played as well in Canadian Opens as I would’ve liked in the past and I’m hoping to change that this week.”

Henderson will look to become the first Canadian to win a LPGA Tour event on home soil since Jocelyne Bourassa of Shawinigan, Que., claimed the ’73 La Canadienne — the precursor to the Canadian Women’s Open — in Montreal.

Sunday’s final round in Portland marked the second time this season Henderson led an LPGA event through 54 holes. But last time she carded a final-round 74 on April 26 to finish third at the Swinging Skirts LPGA Classic in Daly City, Calif.

On Sunday, Henderson shot a 3-under 69 to register the largest-ever margin of victory in tournament history and biggest on Tour since Jiyah Shin won the 2012 Women’s British Open by nine shots.

“I got a lot of confidence and a lot of momentum was built up off that,” she said. “I’ve been playing great all season, my game has been in a great spot.

“I just knew I had to remain patient and keep working on a few little things. My season has really been a lot of fun and it really kicked off (at Swinging Skirts event).”

Henderson said she was besieged with congratulatory text messages and tweets following her win, including one from golf legend Gary Player.

“That meant a lot to me because my sister (pro golfer Brittany Henderson) and I always liked The Black Knight,” she said. “I was up to almost 80 text messages a couple of hours afterwards and a lot of emails from a lot of family members and friends.”

Despite having a healthy bankroll at such a tender age, Henderson said her fortune isn’t a distraction. She’s also been able to resist the temptation of making a big purchase.

“I haven’t really thought about it yet,” she said. “I’m still kind of saving it up and hopefully use it wisely.”