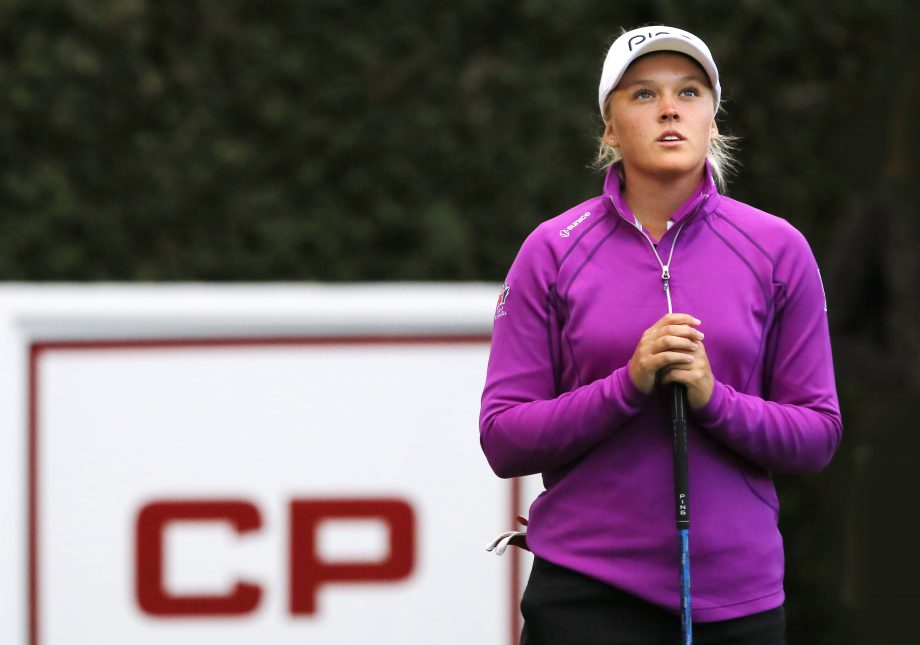 COQUITLAM, B.C. – Brooke Henderson struggled with her putting and shot 3-over 75 during Friday’s second round at the Canadian Pacific Women’s Open.

The score left the 17-year-old at 1 over, hovering around the projected cut on the 6,681-yard, par-72 Vancouver Golf Club course.

“It wasn’t a great day out there but I ground it out pretty well,” said the Smiths Falls, Ont., native.

“I just missed some shots. Other than that it could have been good. I hung in there and really played well on the back nine.”

Henderson, who began the day on the 10th tee, had five bogeys, including back-to-back ones on No. 18 and No. 1. After finishing the No. 1 hole she walked off the green before the other two players in her group had finished.

Henderson battled back with a pair of birdies on the front nine. On the last hole of the day she had to chip onto the green, then sink a four-foot putt for par.

“It was a tricky up-and-down,” she said. “I played really smart with that chip and was happy to make that putt.”

It’s been a busy week for the teenager, who was granted her Tour card on Tuesday after becoming the youngest Canadian to win an LPGA or PGA Tour event with her victory last weekend at the Cambia Portland Classic.

Henderson has been dealing with extra media attention, playing before large galleries. When not facing a television camera she’s been surrounded by autograph seekers of all ages.

“It’s been busy,” she said. “I’ve had a lot of attention and a lot of things that I’ve had to do over the last couple of days.

Henderson fed off the energy of a Canadian crowd that cheered her every shot.

“It’s pretty cool that so many people are watching and wanting me to do so well,” she said. “I think it is a much different atmosphere than if I was playing across the border. It’s the same conditions, just a different crowd.

“It’s fun. I have to really learn to enjoy it and just build off their energy. It is pretty cool that they are cheering for me.”

The win in Portland moved Henderson to No. 17 in the world rankings and boosted her earnings over US$660,000.