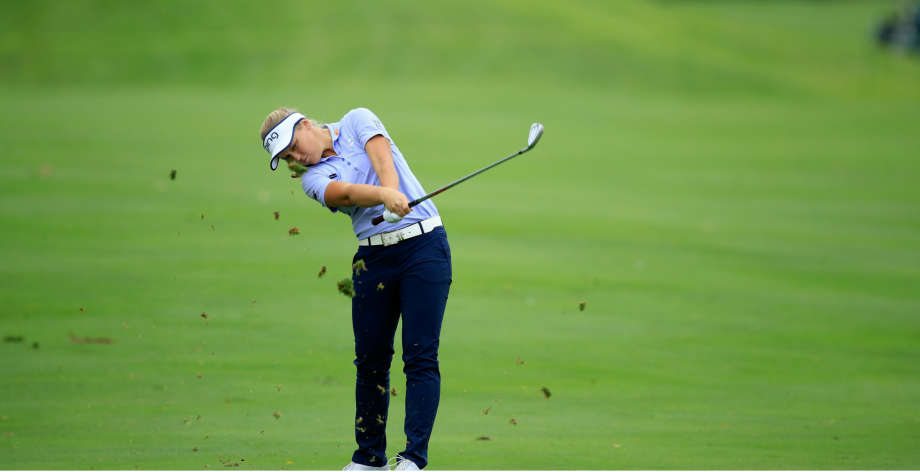 INDIANAPOLIS, Ill. — Canadian Brooke Henderson put in a spectacular performance during Sunday’s final round at the Indy Women in Tech Championship, finishing T7 ahead of next week’s CP Women’s Open in her home country.

The Smiths Falls, Ont., product fired a scorching, bogey-free 63 (her best round of 2018) after recording nine birdies to finish at 18 under.

Sung Hyun Park blew one chance to jump back on top of the world Sunday.

The South Korean star made sure it didn’t happen again.

“I’m very honoured to be ranked No. 1 and I hope to maintain that ranking for a long time,” she said through an interpreter after shooting a 3-under 69 for a four-round total of 23-under 265. “I will try my best.”

If she continues playing like she did this weekend, Park could retain it for quite a while.

She became the second three-time winner on tour this season and now won five LPGA Tour titles over the past two years _ including two majors.

And aside from a rare mishit, which led to a double bogey Saturday, Park played the Brickyard Crossing Golf Course almost flawlessly.

She opened with a 68 on Thursday, followed with a 63 on Friday and started in the next-to-last paring after settling for 66 on Saturday.

After finishing, Park was whisked away to the Indianapolis Motor Speedway’s finish line, where she celebrated by kissing the bricks and taking the traditional sip of milk _ though she declined to take the milk bath as the event’s inaugural winner, Lexi Thompson, did last year.

“I didn’t expect that tradition, but I was pleased to do it,” Park said.

But she needed some help to reach the winner’s circle.

Salas had a two-shot lead after a birdie on the par-4, 13th and seemed perfectly positioned to end her personal victory drought of more than four years _ even after Park cut the lead to one with a birdie at No. 14.

Then the tournament that had been full of low scores and light on drama suddenly switched.

Salas, who had missed only three fairways all week, hit drives into the rough on the last two holes of regulation.

She dropped into a tie after making bogey at the par-4, 17th and got a reprieve when Park’s birdie putt for the lead on No. 18 slid just to the right of the hole. Salas then hit her approach shot from the deep rough on No. 18 within five feet, giving her a chance to win. But after backing away from the putt, she also missed.

“I could have freaked out, I could have done a lot of other things, but I stayed patient and I hit the shot I wanted,” she said of the chip. “All I could ask for was an opportunity.”

Salas, hitting first, drove down the middle of the fairway within 90 yards of the hole. Park answered with a drive about 30 yards longer.

Both chipped onto the green with makeable birdie putts, but Salas’ curved just left of the hole.

Park’s putt, meanwhile, dropped cleanly in the middle of the cup.

“I was not nervous at all,” Park said. “When the other person missed the putt, I felt relieved that I would make it.”

Salas’ fifth career runner-up finish might have been the most frustrating.

After finishing tied for fifth in last year’s 54-hole tournament here with three sub-par rounds, she opened this year’s event with a course record-tying 62 on Thursday. She then had rounds of 69 and 64 and 69 and stayed atop the leader board through every hole Sunday _ until Park’s final putt.

“I stuck with my game plan and a couple of putts could have dropped,” she said. “But you’ve just got to roll with it.”

Thailand’s Ariya Jutanugarn needed to finish higher than sixth to retain her hold on the No. 1 spot. Jutanugarn tied for seventh after shooting 66 for an 18-under 270.

Thompson birdied the final hole to finish 1 under for the day and 17 under in her first tournament following a monthlong break to recover from physical and mental exhaustion.

But it was Park who delivered an eighth straight win for non-Americans.

“My goal was to win three times this year,” Park said. “I’m trying hard, so maybe I will win again.”

Canada’s Brooke Henderson had a great last day, scoring 63. This result in the final round saw her climb a few ladder, finishing in a tie for seventh.