Henderson tied for 7th heading into weekend at ANA Inspiration 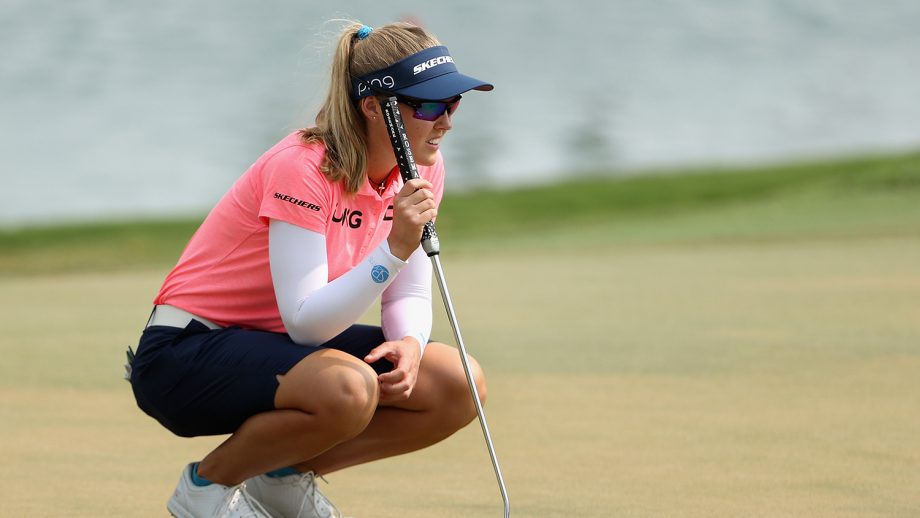 RANCHO MIRAGE, Calif. – The numbers suggested a stress-free time in the desert for Nelly Korda, who had five birdies and a clean card Friday for a 5-under 67 to build a two-shot lead going into the hot weekend at the ANA Inspiration.

All she could think about were two pars.

The only fairway she missed was on her 11th hole, the par-5 second, and she was badly out of position the entire way until making an 18-foot par putt to escape her big mess. One hole later, after hitting a fat shot from the fairway, she again had to make a par putt from some 25 feet.

“I did not know what I was doing on those two holes,” Korda said. “I was happy those two went in. Golf is just all about momentum, so you roll one in here and there and it just makes it a lot easier.”

It only figures to get harder from here.

Korda was at 11-under 133, two shots clear of Mirim Lee, who also played bogey-free in the rising heat for a 65. Joining them in the final group is a daunting figure in these parts, Lexi Thompson, a past champion at Mission Hills who can overpower the Dinah Shore course.

Thompson made up ground quickly with three birdies in a four-hole stretch at the start of her round, including a 4-iron from 220 yards to 6 feet on the par-5 second (she missed the eagle putt) and a 9-iron from 164 yards on the par-3 fifth that led to a 15-foot birdie.

With the tee moved up on the par-5 18th, she swung for the fences and nearly pulled it into the lake, saved by the September date because the ball sinks instead of rolls in the Bermuda rough. She settled for par and a 67 to finish four shots behind, along with Nanna Koertz Madsen (69).

“I left a few out there, but also I made a lot of good putts,” Thompson said.

Danielle Kang looked poised to join the chase, a big week because she is projected to reach No. 1 in the world with a victory. Her momentum was slowed by bugs, a brick wall and a bridge.

Kang came in too steep on a wedge from the 10th fairway and was 10 feet short of the green. She opted to use her putter, but backed off three times from bugs flying around her face. Then, she left it 7 feet short and missed the par putt. She stalked to the back of the green, clearly annoyed, and it didn’t help when she and Anna Nordqvist were put on the clock.

Kang was out of sorts, quickly walking after missed putts. On the 15th, she pulled her tee shot near a wall, and after asking if she could get relief – it was a boundary wall, so no – she hit into the wall trying to get it back to the fairway. It went only about 10 yards, and she had to scramble for bogey.

And then on the 18th, her approach ran through the green and just onto the carpet-lined bridge across Poppie’s Pond. She pitched off the bridge to 6 feet and missed the birdie putt for a 71. She was six shots back, still in the mix.

Korda, however, has looked solid. Thompson’s name on the board stands out given her power and record at Mission Hills.

Korda hit 13 fairways, not the most difficult task with the lush Bermuda grass cutting back how much the ball rolls. More impressive was missing only four greens, and taking 26 putts on greens already sun-baked and fast.

“Definitely very happy with my putting today, and I was superbly happy with bogey-free,” she said.

She picked up two birdies on the par 3s on the back nine and looked like she might give those shots back when she tugged her tee shot on No. 2. She considered taking a drop from the cart path until realizing she would be thick rough, so she hit 4-hybrid some 30 yards out to the right, leaving her no angle.

“Near dead over there,” she said. “Honestly, I was super happy with rolling that putt in. I was like, ‘Just get me off this hole.”

The greens were pure in the morning, though getting the speed right was critical because they are rolling out a few extra feet, putting an even greater premium on pace.

“The thing out here is you hit a solid putt and it keeps on going,” Korda said. “You think it’s going to stop, and it just keeps on releasing, so then you’re like, `This is a good putt, this could possibly go in,’ and then it releases 5 to 6 feet because that’s just how it is out here. I had a lot of 5- and 6-footers for par today.”

And she made them all. That decision to change to a left-hand low grip at the Women’s British Open three weeks ago at Royal Troon looks like the right move. And her confidence is soaring.

The temperatures are trending that direction, too, with a forecast of around 105 to 110 degrees for the weekend.

The weekend will include five of the six amateurs, tying a record at this event. Leading the way was Gabriela Ruffels at 5 under, with Rose Zhang another shot back. Zhang won the U.S. Women’s Amateur last month to deny Ruffels back-to-back wins.