Henderson tied for 15th at mid-way point of World Championship 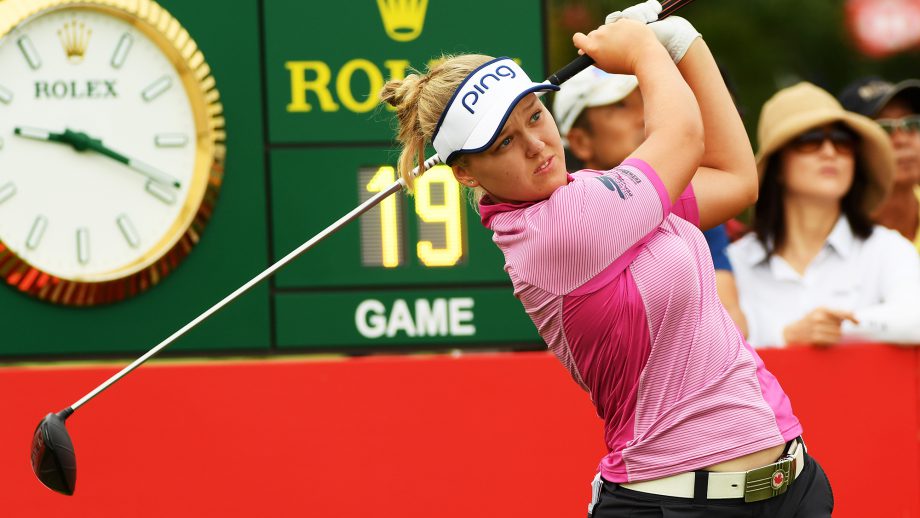 SINGAPORE – The distraction of a chipped tooth proved to be no problem for Danielle Kang as she shot an 8-under 64 to take a four-stroke lead at the halfway stage of the Women’s World Championship on Friday.

Kang, who won last year’s Women’s PGA Championship for her first major title, equaled the course record at the Sentosa Golf Club to lead the LPGA tournament at 12-under 132.

“Never too bad to tie a course record,” Kang said. “That’s interesting to hear. I like that.”

Brooke Henderson of Smiths Falls, Ont., carded an even-par 72 in Friday’s second round, leaving her in a tie for 15th. The 20-year-old will give chase to the leaders on moving day, teeing off at 8:30 a.m. local time.

Nelly Korda, whose sister Jessica won the LPGA Tour event in Thailand last week, had a 66 to be tied for second with fellow American Alex Marina (67) while Minjee Lee (66), Cristie Kerr (67) and Chella Choi (69) were a further stroke back at 7-under.

Kang, who discovered she had broken a tooth after falling asleep while stretching before shooting a 68 in Thursday’s opening round, had eight birdies, four on the front nine and another four after rounding the turn, to post her second straight bogey-free round.

“(My) game is coming easy right now. There are lots of birdies out there. I’m more focused on being present and just hitting the shots. I’m hitting it well, rolling the putt well. So I’m not really worried about the results of how those shots come out. It feels like just a cruising day.”

Kang said her cracked tooth was not painful, but she could still feel it each time she swung the club.

“My dentist told me, I’ve chipped another one before, and he said, ‘You don’t break it at that moment’. It’s been broken and it just chips off. So I don’t know how it broke.”

Korda birdied four of her last six holes as she bids to emulate her siblings by winning tournaments this year. Apart from Jessica winning in Thailand with a tournament-record total of 25-under last week, their brother Sebastian won the Australian Open junior boys’ singles tennis title in Melbourne in January.

“We obviously have a little bit of a sibling rivalry, but everything is very friendly,” Korda said. “ She (Jessica) does make me want to be a better player, and seeing her win last week after the tough off-season she’s had was definitely very inspiring, and hopefully I can step my game up this week and take it home, but we’ll see.”

Top-ranked Shanshan Feng finished at 4-under after a second consecutive 70 while Michelle Wie lost ground with a 73 and overnight leader Jennifer Song stumbled with a 75, including a quadruple-bogey eight on the par-4 third.