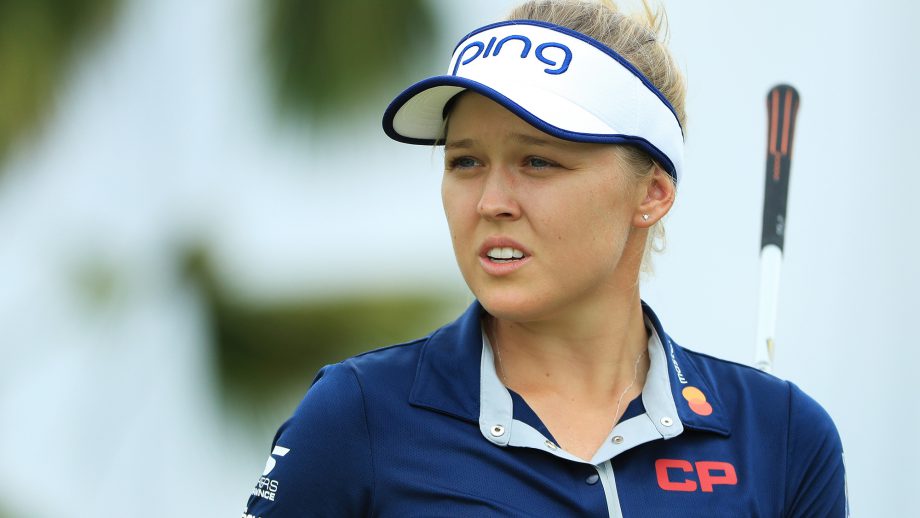 SINGAPORE – Jennifer Song shot an opening 7-under 65 to take a two-stroke lead at the Women’s World Championship on Thursday.

The 28-year-old American reeled off seven birdies at the Sentosa Golf Club in a round that was interrupted for two hours by lightning.

Michelle Wie and Ji Eun-Hee (both 67) were tied for second while Brooke Henderson of Smiths Falls, Ont., and eight others finished a further stroke back at 4 under.

.@BrookeHenderson shoots a first round of 68 at #HWWC and sits three shots off the lead! Watch highlights from her day: pic.twitter.com/fe1mSuMUEg

Alena Sharp of Hamilton was in a large group at 3 over par.

Still chasing her first LPGA win eight years after turning professional, Song took the outright lead when she made five birdies in an eight-hole stretch.

“At times it has been a great struggle because I know I can win out here, but I just never have been given that chance yet,” Song said. “But I kept believing that someday it will happen. I think that’s the reason why myself and other golfers are still grinding because we believe that we can win out here.”

Wie has not won since she captured her first major at the 2014 Women’s U.S. Open. She led in Singapore last year after the first and third rounds.

“I made a lot of birdies from the trees today, so that’s a plus,” Wie said.

Wie looked to be in discomfort in her final few holes, shaking her left wrist, which was already heavily bandaged, but said it was nothing unusual for her.

Korda, who won in Thailand last week, spoiled her round with a double-bogey 5 on the seventh while Kang managed to post a bogey-free round despite a freak accident that broke her tooth before she teed off.

“I was stretching out on the floor and next thing I know, I slept 30 minutes,” Kang said. “I broke a tooth. Call the dentist on range. It’s all good.”