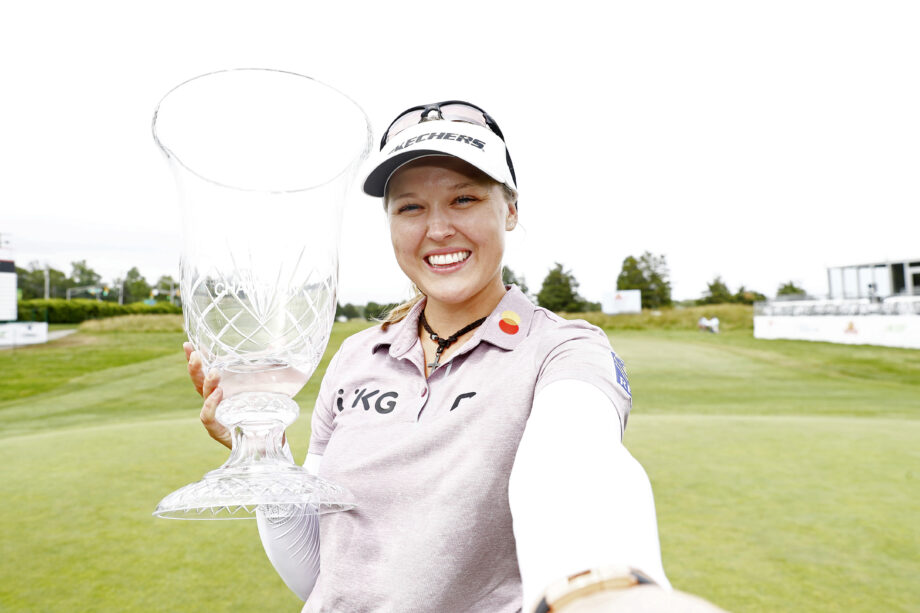 GALLOWAY, NEW JERSEY - JUNE 12: Brooke Henderson of Canada pretends to take a selfie while holding the trophy on the 18th green after winning the ShopRite Classic at Seaview Bay Course on June 12, 2022 in Galloway, New Jersey. (Photo by Omar Rawlings/Getty Images)
Golf Canada

Brooke Henderson returned to the winning circle with a comeback victory at the 2022 ShopRite LPGA Classic.

The 24-year-old trailed by four strokes entering the final round, but rallied on Sunday, firing a bogey-free, seven-under par 64 on the Bay Course at Seaview Golf Club en route to her 11th LPGA Tour title.

“Coming into today I just was trying to go low and see what happens. I didn’t think — I mean, I thought the victory was a possibility, but there are a lot of really talented players ahead of me and I think I was four shots back starting the day,” said Henderson. “I knew it was going to take a little bit of magic, and I’m just really happy that I’m sitting here next to the trophy.”

Henderson tapped in for birdie on no. 18 to secure the clubhouse lead at 12-under, but Lindsey Weaver-Wright matched the Canadian’s effort to force a playoff. In extra holes, Henderson prevailed, making an eagle to claim the trophy.

“I had 193 to the pin. It was a little into the wind and I hit knock-down 7-wood. It’s the same club I hit on 9 that I made eagle there, too, so that was — that club was definitely working for me today. I’ll have to give it a pat on the head later,” said Henderson.

The winningest Canadian in golf history inched closer and closer to the top in Galloway, before finally getting her hands on the trophy this week.

In 2019, Henderson notched a T11 finish, followed by a T6 result in 2020. One year later, in 2021, she returned to Seaview Golf Club and secured a T2 finish, before competing her run to glory on Sunday for her first LPGA win since the 2021 DIO Implant LA Open.

With her win, Henderson is projected to climb ten spots, from 12th to second, on the CME Globe points list.

Next up for the Canadian is the Meijer LPGA Classic for Simply Give, an event Henderson has won twice before, in 2017 and 2019.