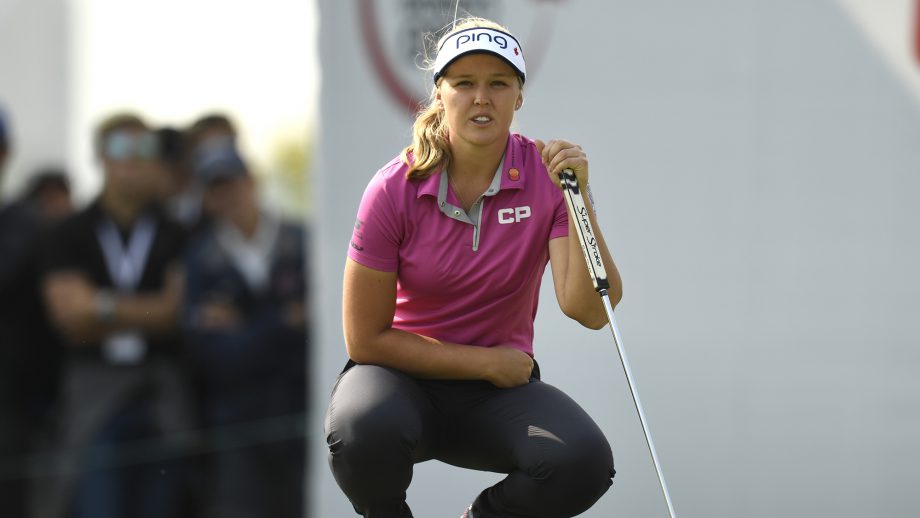 Brooke Henderson isn’t going to cut back on her ambitious golf schedule, even if it makes her climb to the top spot in the LPGA rankings more difficult.

The star golfer from Smiths Falls, Ont., has her sights set on No. 1 after winning two LPGA Tour titles in each of the last three seasons, including a career-defining CP Women’s Open this August in Regina.

Henderson is a bit of a victim of how much she plays, as the world rankings are calculated using a divisor based on tournaments played. Yet she said she won’t cull her schedule next year in order to move up the world rankings.

“Some of the players who don’t play as often as I do move up a little bit more,” she told The Canadian Press by phone from Florida. “But I’m happy to be back in the top-10, I feel like that’s where I belong.”

The 21-year-old tees it up this week at the season-ending CME Group Tour Championship in Naples, Fla., the final event of this LPGA Tour season. She has a home in Naples, and said it’s a nice reward after a long season to be able to sleep in her own bed this week.

Henderson comes into the tournament after a tough four-tournament swing through Asia. She said she got sick at the halfway point of the trip and never recovered.

Still, Henderson has 12 top-15 finishes in 2018 and has earned more than US$1.4 million. She sits ninth in the world and third in the season-long Race to the CME Globe, which culminates this week. A good final tournament will give Henderson a shot at the race’s $1-million bonus.

“The results may not show it exactly, but I feel like my game has been the best it’s been over my time on Tour,” Henderson said.

“When I was on this year my game was really good. I did have some off weeks but generally my game is good and it’s getting better which is cool to think about.”

Henderson said level of competition on the LPGA Tour has gotten tougher since she turned professional at 18. For example, Ariya Jutanugarn, currently the world No. 1, has finished in the top-10 in more than half the tournaments she’s played this year.

“You can’t really take a breather,” said Henderson. “If you want to play well and get a high finish, you have to bring your ‘A’ game every week, which is pretty exciting for the women’s game. It’s definitely more challenging.”

Looking ahead to next year, Henderson confirmed her team would stay the same. Her sister Brittany will remain her caddie, and she’ll continue to use clubs from her longtime sponsor Ping, but part of her plan in the off-season is to test some of the brand’s new equipment.

Once the season wraps up, Henderson will stay in Florida to practice until Christmas, when she’ll return home to Smiths Falls to see her family and friends and take some “real” time off.

Henderson said the highlight of 2018 was winning on home soil in August. With her CP Women’s Open victory, she now has seven LPGA Tour titles, just one back of the all-time mark for Canadian professional golfers, held jointly by Sandra Post, Mike Weir, and George Knudson.

“This year was really busy and there was a lot of things going on, but I’m in a really good place both mentally and physically which is a really nice feeling,” she said. “I think the off-season will be a well-deserved break, but I hope I can go in strong this week and put on a final good show for 2018.”