Henley opens the year with a 65 to lead at Kapalua 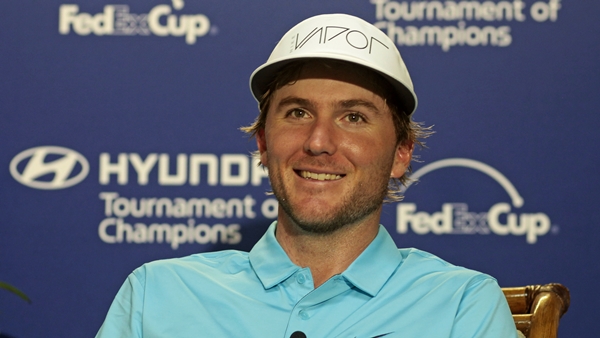 KAPALUA, Hawaii – Russell Henley found Kapalua to be a lot more fun the second time around.

Henley made four birdie putts outside 20 feet on his way to an 8-under 65 on Friday, giving him a one-shot lead over Bae Sang-Moon in the opening round of the Hyundai Tournament of Champions.

Henley made his debut last year in the winners-only event that starts the year and never broke 70. The Plantation Course offered up far better scores without the typical wind off the west coast of Maui.

And anytime that Henley feels good with the putter, the two-time winner on the PGA Tour can be dangerous.

“I kept the ball in front of me pretty decent today, and didn’t scare too many chances at bogey,” Henley said. “But my main thing was obviously I putted great and was seeing the lines today. If I can putt like that every day, I would probably have a few more wins.”

Bae kept his focus in so many ways.

He was in Honolulu practicing last week when he learned the South Korean government had denied an extension of his overseas travel permit. Bae has deferred his mandatory military service, and there are questions over how much time he spent at home during this deferral. He has hired a legal firm to sort out the problems, but he caused a stir back home when he was quoted as saying he would not being going back to South Korea. What he meant was that he was not required to be there while the law firm worked on it.

Inside the ropes, Bae looked as if nothing could bother him.

He opened with six birdies in eight holes, was slowed by a bogey on the 11th hole and picked up two more birdies for a 66.

“A little bit hard to focus on my game because I got a little trouble,” Bae said. “But I try to split things. But I don’t want to think about it, the other things on the course. So yeah, I think I did really good today. I really want to the next three days, also.”

Bae is all about a fresh start.

Kapalua still feels like the first tournament of the season, even though the 2014-15 season began in October at the Frys.com Open, which Bae won at Silverado.

“This is new year on calendar,” he said.

Most players have not competed in nearly two months, except those who were at the Hero World Challenge the first week of December or played overseas. Masters champion Bubba Watson played in Thailand to close out his best year ever, and he has been at Kapalua for the last week before his shots counted. He had a 70, a reasonable start, though he has yet to break 69 in 12 rounds on the Plantation Course.

This was the day to do it. It’s rare when the flags aren’t moving, though even a relatively calm day doesn’t make it that easy. The greens are among the largest, and the grain and slope can prove tricky even to the regulars in this winners-only event.

Henley set the pace. Bringing up the rear were Ben Crane and Kevin Stadler at 74, a nine-shot differential from first to worst in a 34-man field.

Jimmy Walker and Patrick Reed, who joined Watson as the only multiple winners on tour last year who are at Kapalua, led a group at 67 that included Scott Stallings, Robert Streb and Ben Martin, who chipped in for eagle on the 18th with a shot that would have gone 20 feet by the hole if it hadn’t banged into the pin.

Matt Kuchar, never far from the hunt, was among those at 68.

Canada’s Nick Taylor carded the first birdie of 2015 en route to a 69 that left him tied for 12th after the opening-round.