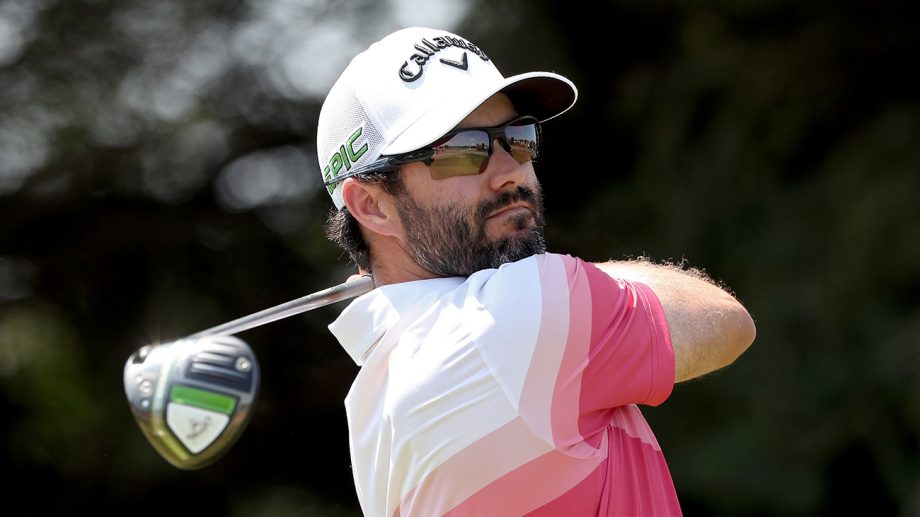 BLAINE, MINNESOTA - JULY 24: Adam Hadwin of Canada plays his shot from the first tee during the Third Round of the 3M Open at TPC Twin Cities on July 24, 2021 in Blaine, Minnesota. (Photo by David Berding/Getty Images)
Associated Press

GREENSBORO, N.C. (AP) – Russell Henley shot an 8-under 62, his lowest round in more than two years, to take the lead Thursday in the suspended first round of the Wyndham Championship.

Canadians Michael Gligic and Nick Taylor are both tied for ninth at 5 under. Mackenzie Hughes is tied for 108th and Roger Sloan is tied for 130th.

A storm halted play for 2 hours, 7 minutes, with 22 players unable to finish.

Past champion Webb Simpson and Kevin Kisner led a group of 10 another stroke behind at 65 at Sedgefield Country Club, where many competitors are scrambling to make it into top 125 to advance to the playoffs that start next week at the Northern Trust.

Henley, at No. 46 in the standings, had no worries about the postseason, but came out fast with a bogey-free round in chasing his first PGA Tour victory in four years.

He moved in front with a two-putt birdie on the par-5 15th before closing with birdies on 17 and 18, the last with a 20-foot putt. He had with his lowest round on the tour since a career-low 61 at the John Deere Classic in 2019.

Henley has played some solid golf of late. He was tied for the 36-hole lead at the U.S. Open in June, then had two straight top-20 finishes before missing the cut at the British Open. He returned this week, hoping he can carry his strong play to the end.

“My mindset,” Henley continued, “is I feel if I can play my game, play my normal game, then I can maybe give myself a chance and that’s kind of where I’m at.”

There are several big names competing to keep their season’s alive. Adam Scott, who started at No. 121, and Matt Kuchar, at No. 124, both had strong starts at 66.

Rickie Fowler, who came at 130th and needing a good week, didn’t help himself with a 71. Justin Rose, the Payne Stewart Award winner this week, has to finish in the top 10 to advance after coming in 138th. He opened with a 66, tied for 19th.

Masters champion Hideki Matsuyama was at 69, tied for 89th.

Olympic medalists Rory Sabbatini and C.T. Pan also are playing after the Tokyo Games. Sabbatini, who took silver for Slovakia behind U.S. gold medal winner Xander Schauffele, started with a 66.

Pan, from Taiwan, won a seven-man playoff for the bronze. He shot a 68.

Louis Oosthuizen, the only top 10 player in the FedEx standings entered, withdrew because of a neck injury.