Henley’s putting gets him lead at Sea Island 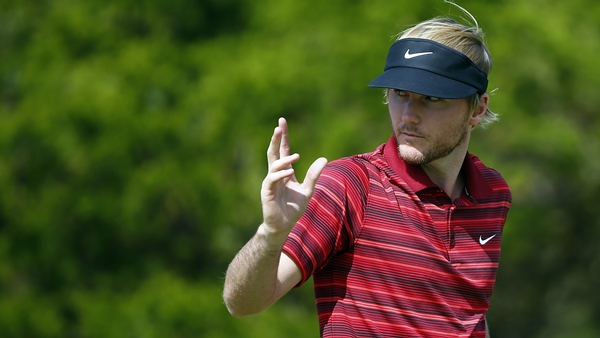 ST. SIMONS ISLAND, Ga. – Russell Henley has a reminder on his phone that goes off every day at noon to tell him he’s the best putter in the world. He didn’t need one Friday in the McGladrey Classic.

Playing for the first time since Sept. 14 at the Tour Championship, Henley one-putted 10 greens on the Seaside course at Sea Island and tied his personal best on the PGA Tour with a 7-under 63 to take a one-shot lead into the weekend.

The 25-year-old from Georgia would not have seen that coming.

When he teed off in the morning chill, he opened with a bogey on No. 10 and was simply trying to keep warm. The only 63 on his mind was whether the temperature would get that high. It did, and he got hot with his best club in the bag – the putter.

“After the first hole, I was just thinking, `All right, you’ve got to hang in there and just be patient and hopefully get something going.’ And I did,” Henley said.

“That kept the round going, and then I felt pretty good with my putter,” Henley said.

Will MacKenzie (68), Mark Wilson (66) and Fabian Gomez (66) were two shots behind. Defending champion Chris Kirk hit his first drive of the round into a hazard and made double bogey, but he recovered with five birdies for a 67 that left him only four shots back.

Henley has won in each of his first two years on the PGA Tour, and it was that inaugural win at the Sony Open that brought so much attention to his putting. He’s not suggesting he is the best putter in golf, though it doesn’t hurt to tell himself that every day.

That’s why he added the phone reminder.

“I try to just believe in my putting and enjoy putting, and people always tells me I’m a great putter, so it’s pretty easy to keep the confidence going when you’re doing that,” Henley said. “I just wish they would say that about the rest of my game.”

He doubts they will ever say that about his acoustic guitar.

Henley has been fiddling with a guitar since he was a teenager, spent more time with it in college and when he turned pro, and now is at least good enough to fulfill a fantasy. During a friendly bet he won with country singer Darius Rucker, he was able to go on stage with him Wednesday night at Sea Island during a concert and play “Wagon Wheel,” even singing with him on the chorus.

More than enjoying just his putting, it’s key for Henley to enjoy his golf. He did well enough after winning the Honda Classic to advance to the Tour Championship, meaning a hectic end to last season. Henley was worn out and needed the five-week break.

“I decided to rest and take a few weeks off until I got the itch,” Henley said. “I’m kind of a worthless golfer if I’m not excited to play. And I feel like I’m excited to play again.”