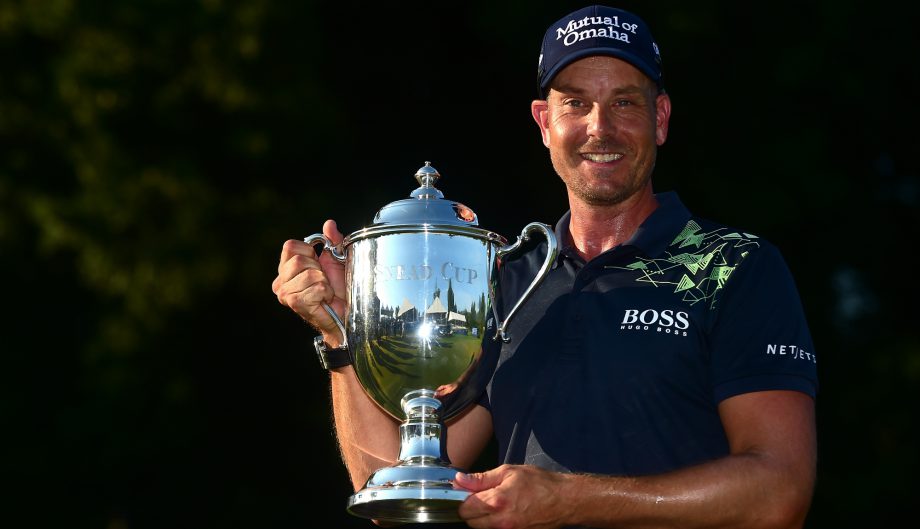 Henrik Stenson kept making birdies on the back nine Sunday at the Wyndham Championship. They added up to a tournament record – and his first victory of the year.

Stenson closed with a 6-under 64 for a one-stroke victory in the final event of the PGA Tour regular season.

The 2013 FedEx Cup champion finished at 22-under 258 at Sedgefield Country Club, breaking the course’s 72-hole record set by Carl Pettersson in 2008 and matched last year by Si Woo Kim.

“It’s certainly a good time to start firing,” Stenson said. “We know the kind of damage you can do in the playoffs. … If you get hot and keep on playing well, you have a chance to challenge.”

Stenson said he left his driver in his locker all week – “he’s a little anxious to get out there and start getting some air time next week,” he quipped of the club – and certainly didn’t need it on the par-70 Sedgefield course.

For the second straight day, he had four birdies in a five-hole stretch of the back nine.

Ollie Schniederjans shot a 64 to finish second. Webb Simpson was 18 under after a 67.

Ottawa’s Brad Fritsch and Nick Taylor of Abbotsford, B.C. were the low Canadians at 6 under. David Hearn of Brantford, Ont., was 3 under.

“I had to keep on making birdies,” Stenson said, “because Ollie was surely not backing down.

Stenson had three consecutive birdies on Nos. 15-17 – leaving a 20-foot eagle putt on the 15th hole about a foot short – after he and Schniederjans were both at 19 under.

He needed it, because Schniederjans kept the pressure on him. The 24-year-old former Georgia Tech player made a 40-foot birdie putt on No. 17 and added another birdie on the par-4 18th hole after placing his second shot 2 feet from the pin.

“I thought I had a two-shot cushion … and as I walked over (to the 18th hole and) looked around, ‘Oh, OK, (Schniederjans) birdied it as well,” Stenson said. “So I better scramble a par here to get the win.”

With Schniederjans watching the television broadcast and hoping for a tie, Stenson rolled a 35-foot birdie putt on No. 18 off the right edge of the cup, then made a 3-footer to end it.

Low scores and tight leaderboards once again were the norm at Sedgefield. With seven holes left for the final pairing, four players – Stenson, Schniederjans, Ryan Armour and Kevin Na – shared the lead at 18 under.

“It was anyone’s tournament on the back nine,” Stenson said.

Stenson moved to 19 under with a birdie on the 13th and Schniederjans joined him with a remarkable recovery for birdie on the 15th. His second shot careened off a canopy covering the gallery and landed in a greenside bunker, but he chipped to 2 feet of the flagstick and converted the putt.

The other subplot at Sedgefield was the push by the bubble players to qualify for the playoffs that start next week at The Northern Trust for the top 125 on the points list.

And Martin Flores, who started at No. 139, jumped to No. 118 and made the playoffs for the first time since 2014 after a 63 highlighted by a hole-in-one on the par-3 16th. J.J. Henry, Harold Varner III and Rory Sabbatini also played their way into the top 125.

“I was very aware of where I was all day but I knew that I needed to be somewhere inside the top 10, have to,” Flores said. “So I was able to get off to a great start and I was able to just keep it going all day.”