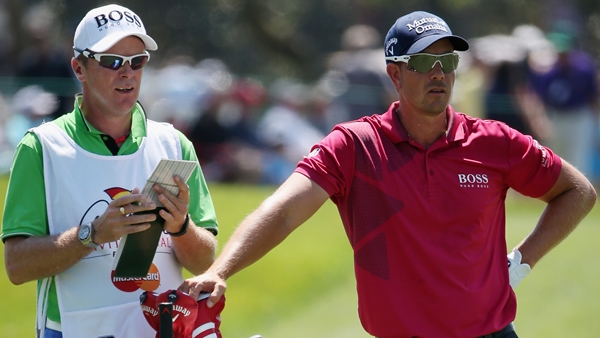 ORLANDO, Fla. – Henrik Stenson of Sweden finished with another flourish at Bay Hill on Saturday and seized control of the Arnold Palmer Invitational.

It was the second straight day that Stenson played the final four holes in 4-under par. Two shots behind, he made a 12-foot birdie on the 15th hole, a 20-foot eagle putt on the par-5 16th and finished with a pitching wedge that plopped down 2 feet from the 18th hole for a 6-under 66.

That gave Stenson a two-shot lead over Morgan Hoffmann, who stumbled on the front nine, recovered with three birdies in four holes and then stalled at the end for a 71.

“It’s a new day tomorrow, so whatever has happened these first three days has put me in a nice position,” Stenson said. “But it’s got to be done all over tomorrow.”

Six players are separated by three shots going into Sunday’s final round, a group that includes defending champion Matt Every.

Rory McIlroy looked as though he would be among them. The world’s No. 1 player pulled to within one shot of the lead with his fourth birdie of the round on the 13th hole. But he ran off three straight bogeys, missing a par putt from just inside 3 feet on No. 15 and chopping up the par-5 16th hole. McIlroy effectively gave up two shots to the field on the 16th, where only one other player failed to make par or better.

McIlroy missed the cut in the Honda Classic and finished eight shots behind at Doral. Asked if Bay Hill counted as being in contention, he replied, “Not anymore.”

“I guess if I can get off to the fast start tomorrow … maybe I will have a chance,” he said. “It would have been nicer to be a little closer to the lead going into tomorrow.”

A two-shot lead can disappear quickly, especially on the back nine. Even so, Stenson has been steady during his three stops on the Florida swing. He tied for fourth at Doral, and missed the three-man playoff at Innisbrook by one shot last week.

Hoffmann regained the lead with back-to-back birdies early on the back nine, but his tee shot rolled up to the lip of a bunker on par-5 16th and he was one of only two players in the third round who had to lay up short of the creek. Hoffmann had to settle for pars, though he was still in the final group with Stenson.

Hoffmann had a chance to limit the number of contenders if he had posted a better score. The scoring average was low again because of slow, receptive greens this week. But he kept getting funny lies in the fairway, mud on his ball and a few breaks that didn’t go his way.

But he still has a chance, as do so many others, especially considering the most recent trend on the PGA Tour. In the last eight tournaments (including the Puerto Rico Open), the winner came from behind in the final round.

Sean O’Hair, who was in the playoff at Innisbrook last week, had a 68 and was five shots behind. The group six shots back included Kiradech Aphibarnrat of Thailand, who matched the low score of the third round with a 65. Harris English, No. 52 in the world as he tries to get into the Masters, hit two balls in the water on the front nine and battled back with four birdies over his last four holes for a 72.

Daniel Berger made the first albatross at Bay Hill, hitting 4-iron from 237 yards into the hole for a 2 on the par-5 sixth hole.

And still on the fringe of contention was Sam Saunders, the 27-year-old grandson of Palmer, who shot 67 to join the group at 8-under 208.