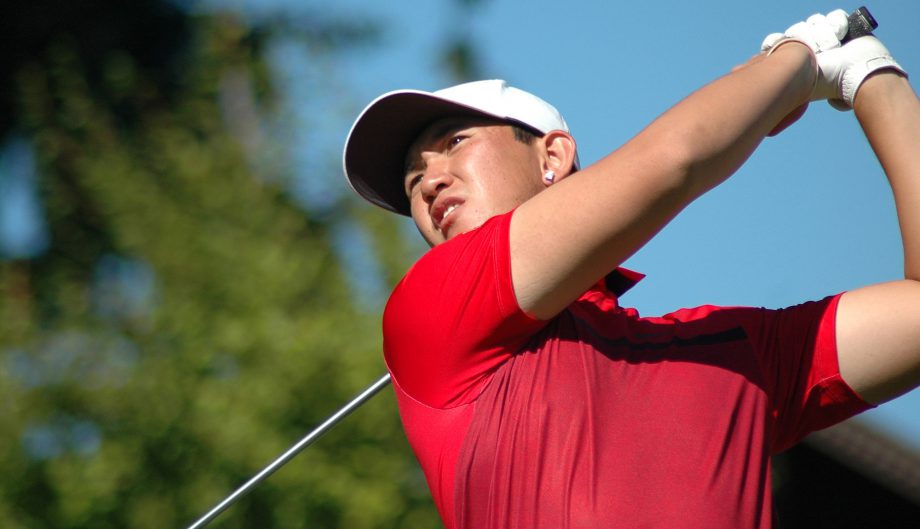 The 21-year old Hoey carded five birdies on the day to shoot a second round 68, while Gilman managed four birdies to shoot 69. The two were one shot ahead of Fort Worth, Texas’ Andrew Presley and two ahead of Plano, Texas’ Craig McCoy through two rounds.

“I’m just trying to hit a lot of fairways. It’s a tough driving course, but I’ve hit it solid so far,” said Hoey, who refused to get ahead of himself with two rounds to go. “I don’t think it will be easier. We’re all fighting for that one spot. I’m just trying to stick to the gameplan and keep focused and keep rolling. That’s the key for me,” said Hoey.

Gilman, meanwhile, was three shots higher than his opening round 66, but actually felt better about his round on day two.

“Yesterday was about making 20-footers, and today was more along the lines of picking the course apart and taking my birdies as they come,” said Gilman.

BACKGROUND ON THE LEADERS: Hoey is looking forward to his professional career – but he’s not done writing his college chapter yet. As one of collegiate golf’s top players (he’s No. 15 in the World Amateur Golf Ranking) for the No. 5 ranked team in the country, he’s hoping to finish his amateur career with a flourish this Spring.

“This whole year, we’ve been really trying to put it all together and match all the pieces of the puzzle,” said Hoey of his USC Trojans, who just won the Southern Highlands Collegiate by 10 shots.

Hoey finished in the top 10 in five straight events earlier this year, and is soaking in his last few weeks on campus while he can.

“It’s a lot of fun and the campus is great. The classes are fun. I can’t complain. With the facilities we got, it’s awesome,” said Hoey.

Gilman, meanwhile, is hoping to use the Mackenzie Tour as a springboard to return to the Web.com Tour, where he played in 2015. The University of Denver made just three cuts that year, but came away from the season with a renewed vision of where he wanted to get to as a pro.

“I learned that I needed to drive the ball a heck of a lot better. Lately I’ve been doing that a lot better, and hence the scores have been good,” said Gilman. “I played terrible all year, but I came away thinking I’m really close to being someone who can stay on that Tour and then progress to the PGA TOUR.”

“I just started my second year. Last year I played on the Adams Tour and had a good year, but I didn’t really get anything out of it in terms of getting to the Web.com Tour. I had a couple of friends that played out here last year that said good things about it so I thought I’d give it a try. I want to get status somewhere.” – Andrew Presley on embarking on his pro career and ambitions for 2017.

“Jamie Lovemark, who’s on the PGA TOUR now, he’s helped me out, and some of the guys who have played the other Tours. It’s a community and it’s great to be a part of it.” – Rico Hoey on USC alumni who have helped guide his career so far.

“I’ve got a really specific game plan for this course. For someone like me who doesn’t hit it crazy far, I probably have to do a lot of that.” – Chris Gilman on his approach to playing Carlton Oaks.

A second year pro who played at LSU before transferring to Texas Christian University, where he played with Mackenzie Tour alums Paul Barjon and Julien Brun, Presley owns one professional win on the Adams Tour.

The 25-year old finished seventh at the 2015 NCAA Championship and was named an Honorable Mention All-American.