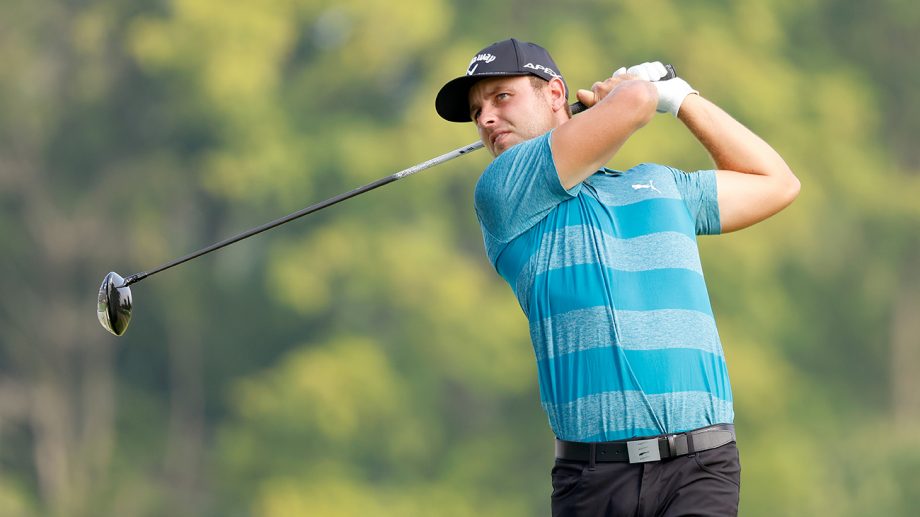 COLUMBUS, OH - AUGUST 26: Adam Svensson tees off from the second hole during the first round of the Nationwide Children's Hospital Championship at The Ohio State University Golf Club on August 26, 2021 in Columbus, Ohio. (Photo by Kirk Irwin/Getty Images)
Korn Ferry Tour Communications

Jaeger entered the day with a share of the 36-hole lead, but early struggles left the Munich, Germany native scrambling as he tumbled down a congested leaderboard. The short-game maestro kept the round together with par save after par save until he closed the front nine with consecutive birdies. But as Whaley posted a 6-under 65 and reached 15-under par, it appeared Jaeger would end the day without a share of the lead for the first time this week.

Undeterred by the rocky start or three-stroke deficit, Jaeger climbed tenaciously to the top of the leaderboard once again, birdieing three of the final four holes for a bogey-free 5-under 66. And just like two weeks ago at the Pinnacle Bank Championship presented by Aetna, the 2020-21 Korn Ferry Tour regular season finale, Jaeger sank a riveting birdie putt at the 18th green and walked into the sunset with a 54-hole lead in hand.

For the fifth time this season, Jaeger holds at least a share of the 54-hole lead, and Sunday’s final round will be the sixth time he plays in the final group this season. It will also give Jaeger yet another run at a Three-Victory Promotion, which would grant him fully exempt status for the upcoming 2021-22 PGA TOUR season, no matter what happens at next week’s Korn Ferry Tour Championship presented by United Leasing & Finance.

In addition to the status which comes with a Three-Victory Promotion, a win Sunday would give Jaeger the strongest possible grip on the No. 1 ranking in The 25 points standings. It would also be the seventh win of his Korn Ferry Tour career, a total which would tie Jason Gore’s all-time record.

Jaeger came tantalizingly close to the historic victory at the 2021 Visit Knoxville Open this past May, brushed with it again when he lost a playoff at the 2021 REX Hospital Open this past June, and again as he played the first 10 holes at 3-over par and faded to a T4 in the regular season finale two weeks ago.

Even after those near-misses, and with questions about a Three-Victory Promotion and seventh career win arising yet again, Jaeger has not grown tired of discussing either topic.

While Jaeger thrilled the gallery with the putter, Whaley delivered the shot of the tournament at the par-4 14th – which, along with the par-4 11th, played as the toughest hole relative to par Saturday. Whaley had 142 yards to the flag at the 473-yard par 4; he landed a pitching wedge within two feet of
the hole, and watched from the fairway as it spun back into the cup for an eagle.

“I was kind of stalled at that point, so that was helpful,” Whaley said. “I knew I was somewhat up (the leaderboard), but I needed a few more coming in to really get towards that final group, so that was huge.”

Whaley, who grew up in McKinney, Texas and played alongside Jordan Spieth and Scottie Scheffler on the state’s golf circuit, also made birdies at Nos. 1, 6, 12, and 15. The Georgia Tech alum’s 65 tied Adam Svensson for the lowest score of the third round.

Canadian Svensson is in fourth at 13 under, while Canadians Stuart MacDonald and Michael Gligic are both tied for 24th, and Taylor Pendrith is tied for 49th.

Whaley played the 2020 and 2021 seasons on the PGA TOUR following a 25th-place finish in the 2019 Korn Ferry Tour regular season points standings. The 26-year-old posted a solo second and T3 in 2019, but his only professional wins to this point are mini-tour events.

Having learned several lessons from his two seasons on TOUR, Whaley hopes those experiences will leadto his first Korn Ferry Tour victory Sunday.

“The first year (on the PGA TOUR) was a big learning experience. I don’t know how ready I was for it, to be honest,” said Whaley, who finished 183rd in the 2020 FedExCup standings, and 140th in 2021. “But I felt like I got a lot better, especially this season. I haven’t won out here and I’ve only really been in contention twice, so that’s all I want to do… I’m just going to try to win the golf tournament.

“It’s something I’ve always wanted to do… win at this level. That’s all I really care about.”