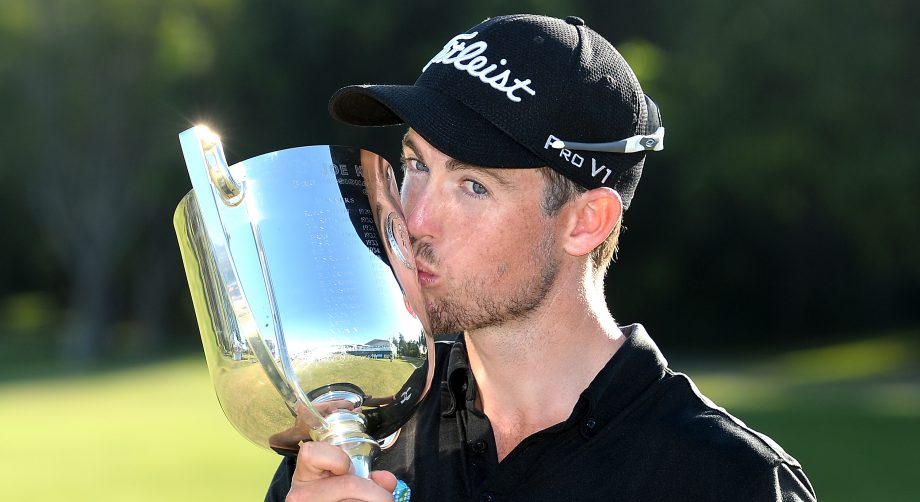 Holman, who shot a final-round 1-over 73, and Frittelli and Varner, who each had 75s, finished with even-par totals of 288 on a tough, wind-swept Royal Pines resort course.

Holman led by two strokes but bogeyed his final two holes. Varner’s birdie attempt on 18 that would have given him the win in regulation slid just wide of the cup.

The Australian was the only one on the fairway in the playoff and hit to the middle of the green, while Frittelli and Varner were off the green after hitting their second shots from the rough.

The 24-year-old Holman ended the playoff with a one-foot par putt after Frittelli and Varner bogeyed. The victory earned him an exemption this season and next on the European Tour, which co-sanctioned the Australian PGA this year.

Zander Lombard of South Africa, who was tied for the third-round lead with Frittelli and Varner, shot 76 and finished fourth, one stroke behind the leading trio.

“It was pretty annoying to almost lose it at the end,” Holman said of his bogey-bogey finish in regulation.

Holman also finished first in the PGA Tour of Australasia Order of Merit, which qualifies him for the British Open and the World Golf Championships.

“It’s huge, I didn’t realize what was on the line,” said Holman, who began the day two strokes off the lead.

“It’s probably a good thing, to be honest. I did think I’d get to those events in the future. I didn’t think it would be this quickly. To do it off the back of a victory is probably going to be better – I’ve deserved it. It’s stuff you dream of playing golf as a kid.”

It was the second straight year that the tournament was decided in a playoff: Greg Chalmers won a marathon seven-hole playoff with Adam Scott and Wade Ormsby in 2014.

Holman’s win continues years of Australian dominance at the PGA, which hasn’t been won by an international player since New Zealand’s Greg Turner in 1999.

Varner’s 66 had pulled him into the third-round lead, but he was nine strokes worse on Sunday.

“That’s just the way it goes sometimes,” Varner said. “I’ll be all right. I’m going to go have a great Christmas and get back to it. Just got to keep working and good things will happen. My time will come eventually.”

The newly designed back nine at Royal Pines by former Australian golfer Graham Marsh had six of the toughest nine holes on the course.

Organizers had a million-dollar “party hole” on the par-3 16th on Sunday, set up with bars and entertainment similar to a hole at the Phoenix Open. The closest anyone came to winning a 1 million Australian dollars ($734,000) bonus was Australian Matt Griffin, whose tee shot landed only six inches away from the hole.