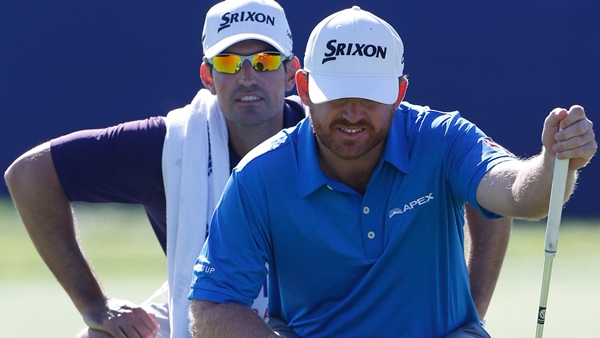 SAN DIEGO –  J.B. Holmes birdied all but one of the par 5s at Torrey Pines and escaped with bogey on his one big miss Saturday, giving him a 4-under 68 to join Harris English at the top of a crowded leaderboard in the Farmers Insurance Open.

Given this is the South Course at Torrey Pines, Sunday might be more about survival than shootout.

“This is a U.S. Open golf course,” English said. “And you’ve got to treat it like that.”

English led by as many as three shots early in the third round until his streak of 39 holes at par or better ended with a double bogey on No. 4. He lost the lead again late in his round with a poor chip on the 16th and had to settle for a 1-over 73.

They were at 9-under 207 with a host of contenders behind them. Of the 12 players separated by only two shots going into the final round, all but three have won on the PGA Tour and two them – Jimmy Walker and Bill Haas – have won in the last month.

In the previous four events this year, two in Hawaii and two in the desert, a score like 73 would be enough to send someone out of contention. The South Course at Torrey Pines, host of the 2008 U.S. Open, is different with its length and its thick rough. Jhonattan Vegas, two shots behind, hit one tee shot on the 14th hole that missed the fairway by a few feet and he had to stoop over just to see his golf ball.

The 68 by Holmes, Carlos Ortiz and defending champion Scott Stallings, who was three shots behind, was the low score in the third round.

“Guys are getting bunched,” Walker said. “You’ve got par 5s that are tough, and a lot of them are unreachable.”

Walker did his part. Standing in the 18th fairway, 261 yards from the hole and a slight breeze in his face, he decided at the last minute to go up one club with a 3-wood, choked up slightly and hit a cut. It wound up about 12 feet by the hole, and his eagle putt to share the lead touched the right side of the cup. He tapped in for a 70.

Holmes is on the A-list of power players, and while his length helped, his short game led to birdies. He got up-and-down from a bunker on No. 6, reached the greenside bunker in two shots on the 603-yard 13th hole and had to lay up on the 18th after driving into the rough. He holed a 12-footer for birdie.

He was tied for the lead until pulling his tee shot into a hazard left of the 17th fairway, and then putting the next shot into a bunker. But he got up-and-down to escape with bogey and had a share of the lead when English made his late bogey.

“This golf course is a big, ball-striking course,” Holmes said. “So you’ve got to hit it in the fairway, you’ve got to hit some good shots and give yourself a chance for some birdies. … The rough, it probably plays worse than it did at the U.S. Open when they had it here in 2008.”

Lucas Glover, emerging from a tough stretch of poor putting, had a 70 and will be in the final group with Holmes and English, a close friend.

No shot was more memorable for Chad Campbell than his hole-in-one on the picturesque third hole with a pitching wedge. He played well the other 17 holes for a 70 and is in the hunt for his first victory in more than seven years.

Day, at No. 8 in the world the only player from the top 10 to make cut, holed out on the 17th for eagle to salvage a mediocre day and shot 71. He was only two shots behind.

Leading the Canadian charge is Adam Hadwin. The Abbotsford, B.C. native is 4-under. Roger Sloan of Merrit, B.C. has a share of 62nd at 1-over.

English, a two-time winner on tour, figured anything under par on Sunday might be good enough to win. Or maybe not. He later said anyone within five shots of the lead could not be counted out in the final round at Torrey Pines. If that’s the case, 31 players are still in the picture.