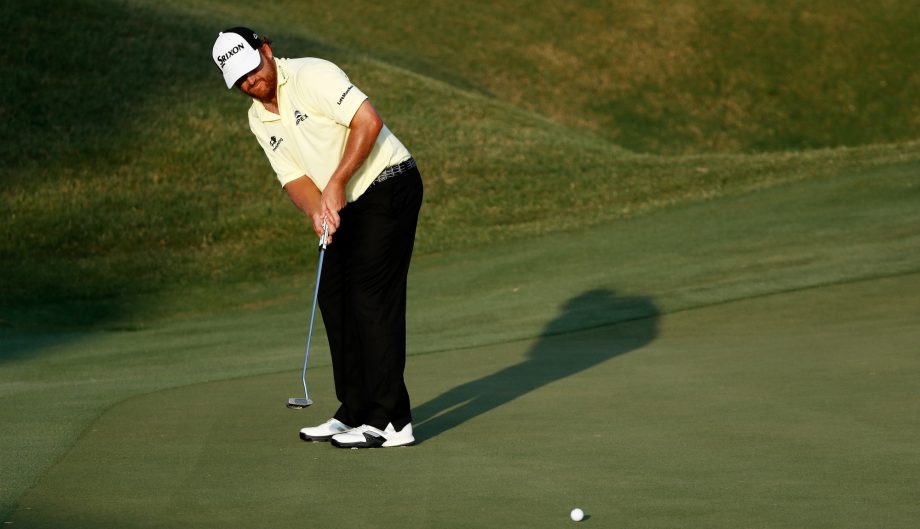 The only bogey J.B. Holmes made Saturday could have been a lot worse, and he pieced together a 2-under 70 in strong wind on a punishing course to share the lead with Kyle Stanley going into the final round of The Players Championship.

Holmes hit his tee shot so far to the right on the 14th hole that it went into the water on the 12th hole. He hit a blind shot from 230 yards into the wind to a bunker and managed to get up-and-down to limit the damage, which is what Saturday at the TPC Sawgrass was all about.

“I usually can make a bunch of birdies, so if I can just narrow it down to one bogey, then I’m usually in good shape,” Holmes said.

Stanley got his trouble out of the way early with three bogeys in four holes, and then was bogey-free the rest of the way. He saved par from the back bunker on the 18th hole on the Players Stadium Course for a 72.

“You just kind of have to remind yourself that even though you’re a little bit over par, on the leaderboard I was still in a pretty good spot,” Stanley said.

The TPC Sawgrass has trouble at every turn even in calm conditions. Throw in a relentless wind that the final half of the field faced all afternoon, and it was as much about staying in neutral without losing ground – or crashing.

And there was plenty of that.

Jon Rahm of Spain, the best newcomer on the PGA Tour, was five shots behind when he started and missed the 54-hole cut with an 82. Matt Kuchar took a 9 on the 14th hole and shot 81, his highest score ever on this course. Phil Mickelson shot a 78.

Of the 82 players in the field, 49 made a double bogey or worse.

That what’s made Ian Poulter’s round remarkable in so many ways. Two weeks ago, Poulter wasn’t even in the field and no longer had full status until the PGA Tour realized it made a clerical error related to his return from a foot injury. The Ryder Cup stalwart made the most of the opportunity with the only bogey-free round of the day, and even though he had just one birdie, that 71 was enough to give him a serious chance.

Poulter wasn’t alone in having a shot at a big payoff from the $10.5 million purse.

Si Woo Kim was bogey-free until he hit a shot off the bulkhead and into the water on the par-5 16th and missed a short par putt. He bounced back with a birdie on the island-green 17th and shot 68 to finish two shots out of the lead.

The longest putt of the day at the 17th hole belongs to Seung-Yul Noh.

Emiliano Grillo of Argentina had seven birdies in his round of 67 and was tied with Poulter at 6-under 210.

And right behind them was Masters champion Sergio Garcia, who was 4 over through six holes in the opening round and began his recovery project with a hole-in-one on the infamous 17th. Garcia kept pecking away, and his 67 in the third round left him only four shots behind.

The low round belonged to Pat Perez, who shot a 66, with a bogey on the final hole, before the wind began to blow consistently and the TPC Sawgrass became more of a challenge than it already is.

That goes for Dustin Johnson, the world No. 1, who looked as though he might have a chance to at least get in the mix until tiny mistakes led to bogeys, and a big mistake led to double bogey on the 16th hole. Johnson shot 40 on the back nine for a 74 and was 11 shots out.

Defending champion Jason Day had two double bogeys in his round of 73 and was eight shots behind, trying to keep alive hopes of becoming the first player to win back-to-back since this tournament began in 1974.

Rory McIlroy could only manage a 71. He will play with Day on Sunday, also eight behind.

Mackenzie Hughes, Dundas, Ont., is T25 at even par.