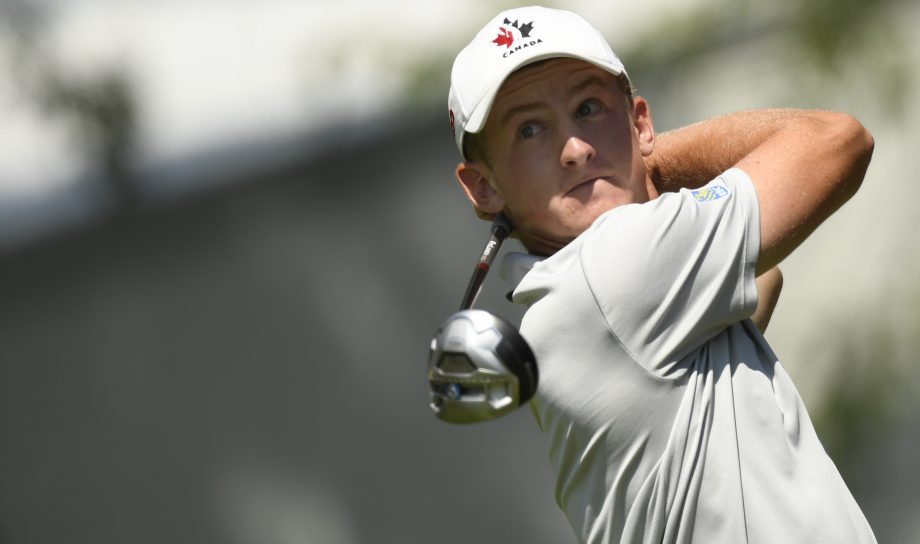 OAKVILLE, Ont. – Jared du Toit didn’t know what to do with himself after signing his scorecard.

The amateur golfer from Kimberley, B.C., eagled the par-4 17th hole at Glen Abbey Golf Club then birdied 18 to tie for third in the first round of the RBC Canadian Open on Thursday. Americans Chesson Hadley and Kelly Kraft were also at 5-under 67, a shot behind co-leaders Luke List and Dustin Johnson.

Du Toit came down the steps of the scorekeepers trailer to calls from fans asking for his signature. Then a media relations person from the PGA Tour directed him to a waiting circle of reporters with microphones and cameras, all to the surprise of the Arizona State University player.

“It’s the first time I’ve had to sign autographs after a round, so that was awesome,” said a smiling du Toit. “It’s definitely in the top-three rounds I’ve played in my career, feeling wise.”

Du Toit, who was born in Calgary but moved to British Columbia as a child, hadn’t played at Glen Abbey before practice rounds on Monday and Tuesday. He relied on the advice of his caddie, a local golf teacher. The 21-year-old member of Golf Canada’s amateur team is just going to keep things simple heading into Friday’s second round.

“I don’t tee off until 2:30 tomorrow, so I shouldn’t have no sleep as an excuse,” said du Toit. “Just come out here, keep doing what I’m doing.”

Amateur Garret Rank (69) of Elmira, Ont., who is a professional hockey referee, was the second lowest Canadian behind du Toit. Rank, who was paired with du Toit, made an eagle putt from the rough edge of the green on 18 to finish at 3 under.

“I was a little uptight at the beginning, but Jared was playing well and just kind of told myself, ‘hey, played a lot of golf with him and there’s birdies to be made,”’ said Rank. “Just stayed really patient and closed strong and was 4-under on the last four.”

Adam Hadwin of Abbotsford, B.C., shot a 72 to finish the first round at par, while David Hearn of Brantford, Ont., was 2-over 74. Adam Cornelson of Langley, B.C., Corey Conners of Listowel, Ont., and Nick Taylor of Abbotsford are tied at 3 over.

Olympian Graham DeLaet of Weyburn, Sask., amateur Blair Hamilton of Burlington, Ont., and Ottawa’s Brad Fritsch all tied at 5-over 77, and Mike Weir of Brights Grove, Ont., and Branson Ferrier of Barrie, Ont., were grouped together at 6-over 78. Amateur Hugo Bernard of Mont-Saint-Hilaire, Que., was 9-over 81 and Montreal’s Dave Levesque was 13-over 85.

#TeamCanada amateur Jared du Toit sits T3 at the @RBCCanadianOpen after opening with a 5-under 67. #RBCCOhttps://t.co/TTVLwvrEEj